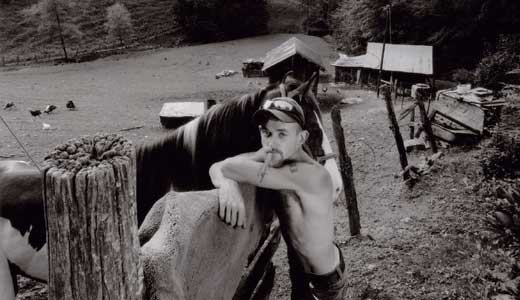 He’s been a Guggenheim Fellow and the subject of a substantial documentary film. He’s generated controversy by his photographic methods and personal connection to his subjects. Shelby Lee Adams has chronicled families of the “hollers” of Eastern Kentucky for three-dozen years, and he’s coming to Louisville for a gallery show of his prints and to give a presentation/signing for his latest book, “Salt & Truth.”

The book is the fourth monograph of a project begun in 1993. “Appalachian Portraits,” along with subsequent volumes in 1998 and 2003, showed rural poor in Appalachia. The prints are character-rich, showing snake-handling churchgoers and subsistence farmers who display resilience and seem unafraid to appear eccentric in front of the lens. Adams has been accused of staging scenes while seeming to appear as a documentarian — for example, he brought a large hog to a family to show slaughter and utilization in a manner that would have been more typical of a previous generation. But Adams has a secure place as a longstanding friend to many among the rural poor in counties like Harlan. He recently shared with LEO by phone, “When I am there, I don’t have to go into this long rap describing my project. The first day I’m there, I’m engaged and making pictures. Everyone there has my work of their father and mother and grandma hanging on their walls. I can just continue where I left off, even though it might be nine months between visits.”

Adams does share that his early career included internal debate about techniques for gathering material — even to technical matters. “At the end of my education, in the ’70s, it was kind of a question of whether it’s anthropologically correct to bring artificial lighting into a documentary environment. It’s been debated — still is, somewhat. But I went to art school — and adding light to a picture was just another tool. For me, it means I can work every day,” even when the clouds take over the mountains.

In discussion with Adams, he understands that he’s a product of his times — such as a formative event when a relative’s culture clash with a photojournalist led to a fatal shooting. “Hobart and I were second cousins. I’d gone to his farm to draw and paint and take pictures. I was a relative, but I just asked permission and it was never an issue. The ‘War on Poverty’ was getting national news, and there was a lot of tension within the community about documentary photography and filmmakers appearing on television. And my cousin Hobart thought he was being made fun of — and the whole community. The photographer did not ask permission … it was complicated … (Hobart) was incited by a jealous daughter-in-law. It was a time in the late ’60s. So in my beginning career, I didn’t have a real positive feeling toward photography — not just because of my cousin’s situation but of how Appalachia was portrayed in the media then.”

But Adams was a formidable observer, and he learned more about photography’s potential. “It’s ironic that I grew up to become a professional (photographer) and I’m accused of the same thing — of taking advantage of people. I grew up in a culture understanding how people felt about the outside media’s engagement or involvement. In 1974, I started working with a 4×5 camera because it was big, bulky, and people saw where it was and didn’t worry about it. And I made 4×5 Polaroids and showed (potential subjects) right away what we were making pictures of. When I started that as a senior in art school, my subjects were relieved. The relaxed pictures and poses I got … they reacted differently than to someone with a motor-drive going ‘click-click-click’ and no one knowing what they got.”

After decades of trust that expanded through the hollers by word of mouth, Adams finds himself watching fragmentation and decline in a culture that has long amazed him with its deep respect for “the love of family, and home, and being close to the land.” Now, he says, the very same holler presents a clear divide between “younger people who wear overalls and have log cabins they live in, and then you’ll see others that have computers and satellite dishes and have tattoos and a modern look.”

The Paul Paletti Gallery (713 E. Market St.) is exhibiting work from Shelby Lee Adams, with an opening reception Thursday, March 1, at 6 p.m. The artist will also attend the First Friday Trolley Hop the next day. On Saturday, March 3, Adams will be at the Carmichael’s Bookstore (2720 Frankfort Ave.) for a presentation and signing at 4 p.m.