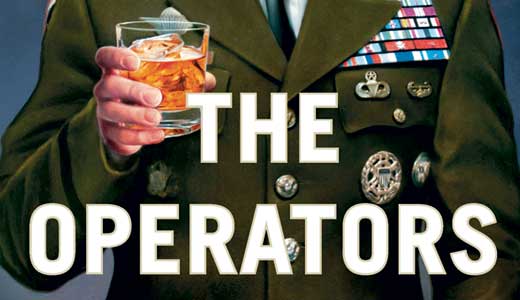 ‘The Operators: The Wild and Terrifying Inside Story of America’s War in Afghanistan
By Michael Hastings. Blue Rider Press; 432 pgs., $27.95.

In the summer of 2010, Rolling Stone published a profile of Gen. Stanley McChrystal, the commander of U.S. forces in Afghanistan, titled “The Runaway General.” The article details several weeks inside McChrystal’s inner circle, including a raucous night in Paris, during which several choice comments are made about Vice President Joe Biden (among others), as well as a trip to a forward operating base where troops seemed to openly resent McChrystal’s rules of engagement. The article’s author, Michael Hastings, says he expected the piece to give the general and his staff a headache for about 72 hours. Instead, within days, McChrystal was recalled to Washington and abruptly fired by President Obama.

Hastings’ new book, “The Operators: The Wild and Terrifying Inside Story of America’s War in Afghanistan,” is largely an expansion of “The Runaway General,” along with a more recent article on Gen. Petraeus, McChrystal’s replacement. At the same time, it’s more than simply a longer look at McChrystal and his entourage of “killers, spies, geniuses, patriots, political operators and outright maniacs.” Here, Hastings’ relationship with McChrystal and his men is as central as McChrystal’s attempts to correct America’s course in Afghanistan. It is a modern account of the complicated and sometimes fraught relationship between journalism and the military, of the competing goals of access and objectivity.

Hastings’ great gift as a journalist is his ability to recognize the bubble his subjects operate within, without himself succumbing to its “reality-distorting effect.” In fact, despite his plain disgust with the Afghan war and many of those involved in it, Hastings saves some of his sharpest barbs for those fellow journalists whom he feels have failed in their obligation to critically and objectively examine powerful generals and politicians.

Whatever your feelings on the war in Afghanistan, it should be clear that Hastings writes from conviction and with a ferocious, refreshing clarity. At the end of his time with McChrystal, Hastings writes about the “simple and terrifying reality,” which the war’s military and political leaders had either failed or refused to acknowledge, that “despite spending $600 billion a year on the military, despite having the best fighting force the world had ever known, they were getting their asses kicked by illiterate peasants who made bombs out of manure and wood.” In this way, he belongs more to the generation of journalists who covered Vietnam than to his own.

Like the war that produced it, “The Operators” is wild, messy and sometimes uneven. While not as coarse as his fellow Rolling Stone contributor Matt Taibbi’s writings on the financial world, Hastings’ prose is still laced with more profanity than is probably necessary, and his main narrative is awkwardly interwoven with a series of observations about the wider military and political situation in which McChrystal’s story is situated. Many of these sections lack the immediacy of Hastings’ first-hand accounts, and he often overplays his stylistic hand, coming across less as an incisive journalist than a glib historian.

It is hard to read “The Operators” without your own feelings on the war interfering. Hastings’ account of McChrystal is neither the hagiography of many early profiles, nor is it the unpatriotic hit job some commentators have mischaracterized it as. Without masking his contempt for the war, Hastings succeeds in painting a very human portrait of the conflict, one that deftly evokes all its complexity and absurdity.