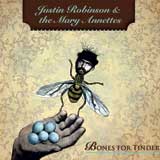 Justin Robinson was the jug-blowing heart of the Carolina Chocolate Drops until last February. The trio finished touring on their excellent, Grammy-nominated, Genuine Negro Jig album, and announced Robinson’s departure from the Lincoln Center stage, accompanied by the usual noises about pursuing “new challenges” and being “still friends.” A year later, with new group the Mary Annettes in tow, Robinson’s made an album as vital, as fun and as strong as anything his former group has released. Bones for Tinder finds Robinson still in the old-timey vein, if more informed by the rhythms and language of hip-hop. The violins often play staccato rhythms, building up a tense energy that would sound familiar to the RZA. “Neptune” opens the set beautifully, a showcase for Robinson’s vocals, while “Bright Diamonds” steps to the left rhythmically. A fresh take on Jig’s “Kissin’ and Cussin’” adds a sense of foreboding. “The Phil Spectors” may be the most fully realized production (natch), though longtime fans may rankle at the stylistic shift. NPR will love this one, though it may be doomed to become the climactic montage song in the next Zach Braff rom-com.