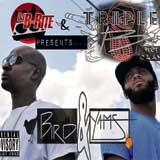 Triple B is the duo of local MCs Jas’K and Kogan Dumb. Jas’K has previously dropped a solo mixtape; Kogan’s is reviewed below. Their affiliation with T. McAfee sets a certain expectation, as he is one of the city’s best. Unfortunately, Bird and Yams suffers from low-budget production values, a bad microphone, clichéd topics and an overly long running time. Even McAfee can’t raise the level of this one; his voice is barely recognizable in this poor mix. I will give credit that over 22 tracks, the guys don’t run out of cocaine and pussy double entendres to toss up. (I’d give up after four or five, personally.) The second half of the record falls to easy samples — not flipped, but played wholesale, from the likes of Budos Band and Kanye, and should have been left on the hard drive from whence it came.