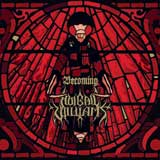 Abigail Williams always seem to alter their black metal style on every release. On Becoming, they channel Wolves in the Throne Room’s affinity for atmospherics and dynamics, but with an old school, raw, simplistic approach to the fast parts, unlike the technical playing on past releases. The end result is stripped-down black metal intermingled with an interesting exploration of violins and lush atmosphere, utilizing a female choir lower in the mix. Slowly strummed guitar becomes covered in wind and building drums as “Ascension Sickness” takes shape, imploding into furious speedy gait, only to mellow out in a guitar and violin duel. The pulsing waves on “Infinite Fields of Mind” meld wonderfully with clean, melodious guitars, and suddenly erupt into a swarm of buzzing riffs and piercing screams that sound possessed. Haunting violins weep in the opening of “Beyond the Veil,” a 17-minute epic where Abigail Williams meld classical playing with dynamic songwriting into a mixture that swirls into an inseparable maelstrom of atmospheric beauty and rage. Becoming emanates a lucid trance-like feeling similar to psychedelia — a worthy trip to take.