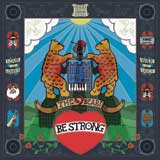 Uh-oh, electronic music from Europe with a “sense of humor”? The prospect of an album that’s ostensibly made by two talking bears, and that makes a number of references to classic house, may bring back unwelcome memories of dreadful summer holiday novelty tracks. However, this record is pretty far removed from the likes of Aqua or the Vengaboys. As a DFA release with a sound that is very London (it’s in the drums), Be Strong instead presents a collection that, through embracing the conventions of the genres it aspires to recreate, is an infectiously beatific, and at times touching, snapshot of the duo’s relationship with music. Reminiscent of the way producer Joe Goddard’s other band, Hot Chip, express their love for and/or raise questions about the music they are involved with, we find The 2 Bears making reference to feeling imprisoned by their compulsion to stay true to musical roots while seeking out new material. On the other hand, the bears just want to have a giggle and a dance with us. In a sense, The 2 Bears have captured the essence of the club scene — a scene that demands to be taken seriously, even amid all the grinning and sweating on the dance floor.