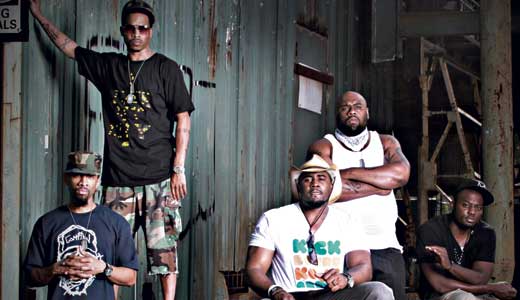 The New Vintage Showcase, an ongoing series of concerts based at ZaZoo’s and created by Hunter Embry, celebrates its first anniversary this Friday with a concert featuring Nappy Roots. That group is celebrating the 10th anniversary of their first album, Watermelon, Chicken & Gritz. LEO caught up with Embry.

LEO: Why did you decide to start the NVS?

Hunter Embry: Well, I’m a schooled music journalist and have freelanced for several local and national publications. I’ve also spent the last four years playing hundreds of shows, touring and recording with The Bad Reeds. Writing and being in a band helped me to unconsciously develop a lot of contacts … I know what I do and don’t like about bar owners, booking agents, sound guys, door guys and bartenders … Also, I can’t forget, one of the best sound guys in town — Dave Chale — was one of my best friends and much of the success of NVS should be credited to him. If it doesn’t sound good, my job is pointless.

HE: Beats me. The Bad Reeds had made a pact to never play that part of town again. Our worst experiences as a band were in Southern Indiana, Houston and St. Matthews. Fortunately, Mike (Burlew, owner of ZaZoo’s) needed some help and gave me the opportunity. It worked out really well for me because I wasn’t having to really compete with the places in Germantown that I frequented and loved; I was a whole other world away. Now I’m starting to see that there’s a huge market of folks on the East End that were hungry for local and regional, original music, and they had been neglected for quite some time.

LEO: Would you want to follow in Cap’n JK’s footsteps and try running an annual festival like Forecastle?

HE: Not till I can get my hands on a van like his. Have you seen that thing? It’s wild. If I were asked to join in on something like that, I couldn’t say no, I love to work. But the thought has never crossed my mind. I know the last few Forecastles have been some of the best times I’ve ever had in this beautiful city. Funny story: When I was waiting tables, I actually waited on JK and the Production Simple guys as they were planning the layout of the festival. “Excuse me, sir, I think that would be a great spot to put The Smashing Pumpkins. Would you like some more coffee?”

More information can be found at facebook.com/TheNewVintageShowcase.