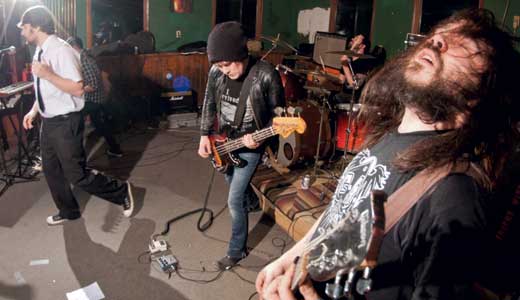 It’s easy for the Pixies to rehash old favorites for millions of dollars, but it’s more interesting when a lesser-known band regroups because they can’t not play together. Nixon has gotten back together to spread more heavy sounds, even as members remain with other bands, such as The Hookers and Trophy Wives. LEO caught up with guitarist Doug Walker.

LEO: How did the band get back together?

Doug Walker: I think for all of us, Nixon always felt like the girlfriend you never quite fully get over. When we stopped working together as a band four years ago, it was a situation where we weren’t really enjoying it anymore. I’m pretty sure it felt stagnant to all of us, and there were a lot of outside situations we were dealing with as individuals that just took away from the overall enjoyment of the band. Over the course of the time we were inactive, we often talked about the idea of doing “one more show” or “trying to get it going again,” but the time was just never right. We finally found ourselves in a situation where we were all in town and had the availability and desire to do it again. After one practice, we decided to give it another go … Working together is much smoother this time around. It’s been a very positive experience.

LEO: There are echoes of some great heavy, underground bands from the ’90s, and some recent ones as well, in these songs. How has your songwriting evolved through the years?

DW: Lyrically, Matt Haas is, in my opinion, an absolute genius at painting a picture of despair and dissatisfaction. Musically, Matt Jaha and myself do everything possible to take what we like to call a “creepy” approach to song writing. Eric McManus and Tony Ash are hands down the most solid rhythm section in this city. Just those two can create a crushing sound. Jaha and myself only need to layer our guitars on top of them, then Haas comes in and makes it all make sense by telling a story.