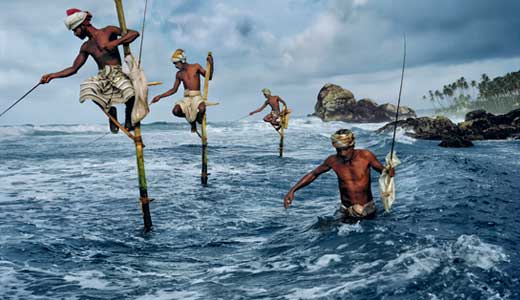 These are the eyes that connected with the world.

When “Afghan Girl” by photojournalist Steve McCurry was on the cover of the June 1985 National Geographic, it caused a sensation. Her green eyes, in contrast with her dark red clothing, created a focal point that resonates to this day.

“Most of my images are grounded in people,” McCurry says. “I look for the unguarded moment, the essential soul peeking out, experience etched on a person’s face.” He found them all in this portrait of Sharbat Gula.

Her identity was unknown until 2002 when McCurry led an extensive search to find her again. He had originally stumbled upon her in a Pakistani refugee camp during the Soviet occupation of Afghanistan. National Geographic put the adult Gula on the cover of the April 2002 issue and produced the documentary “Search for the Afghan Girl” that aired the same year.

While “Afghan Girl” may be his and National Geographic’s best-known photograph, McCurry has been working for decades telling stories through images. He’s a colorist, using it to give the subject matter a voice. In his hands, color becomes a siren’s song leading us into the composition. It’s no wonder a 12-year-old girl with green eyes mesmerized him.

In the McCurry exhibition at the Paul Paletti Gallery, “Red Umbrella” quickly became a favorite of mine. His masterful photographer’s eye saw repeating reds among the tourists at the Taj Mahal. A woman shields herself with the umbrella of the title, while not far is a man sitting with a red shirt and red-rimmed hat. Another red-shirted man strolls by. McCurry places the scene in the foreground, with all the action taking place in front of the reflecting pool.

The “Orange Seller” lives in a washed-out, colorless world. Wearing muted clothing, he leans on a hollowed-out car in an open room of gray walls. All is dull in color and life except for the bundle of oranges on the car trunk. A small lantern glows nearby. These rays of light enliven his life in more ways than one.

In the rush of deep blue water, “Fishermen” perch themselves on poles to fish. In “Dust Storm,” a group of women are huddled together for protection against the whirling dust, becoming one unified mass of red skirts, head coverings and wraps.

McCurry’s travels let him see the beauty in the harshness of the world. As a result, he founded Imagine Asia, a nonprofit dedicated to helping impoverished children. National Geographic, in honor of Gula, the original “Afghan Girl,” has organized the Afghan Children’s Fund.

The multi-award-winning McCurry has been a member of the international photographic cooperative Magnum Photos since 1986. He fits their creed nicely, to “chronicle the world and interpret its peoples, events, issues and personalities.” He sees that world in dazzling color.