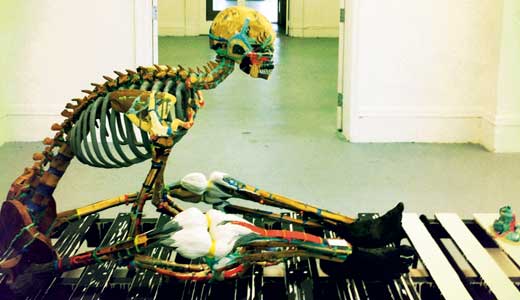 Of all the mistakes in my recent past, not high-fiving Taylor Baldwin at the opening of his sculpture show at Land of Tomorrow ranks pretty high. All kidding aside, here’s about 10 reasons why:

Baldwin’s sculptures are that perfectly compelling combination of grotesque and beautiful. From far away, they seem intriguing and weird — skeletons riding on rafts of oil barrels; Plexiglas chainsaws sitting atop deconstructed stumps; neon plastic skulls that radiate like ghost coral. Curiosity is smartly rewarded by Baldwin — the more looking you invest in his work, the more his minute detailing and deliberate craftsmanship become apparent.

Baldwin’s pet obsession, it seems, is the transformation of unexpected materials into the compositional elements of his sculptures. Born in Arizona and currently residing in Richmond, Va., he uses found materials he barters for, takes or salvages. In “Campaigner,” he lists “branches from a tree struck by lightning, roots recovered from historic floods in Lake Champlain, chamber and stock from a destroyed shotgun recovered from landfill, cast coal, ‘shorty’ pool cue from Safari Lounge autographed by Jimmy, Cathy and Jim (Safari Lounge since burned down)” as his materials, as opposed to the mysterious and often vague “mixed media” citation conventionally seen on labels.

At the opening of his show, I observed that people looking at the work seemed genuinely surprised to see what he used and how he used it. There is no real reason why anyone would need to make a milk crate out of wood they have collected from arson sites instead of snatching a milk crate from somewhere — but that unnecessary attention to craftsmanship and detail is what makes Baldwin’s work idiosyncratic and kind of pre-modern. You want to go out of your way to look at it, because he went out of his way to make it.

This show, entitled “Prodrome,” is personal and fun. It has this feeling of a boy who is just “really into” stuff — hobo code, black lights, empty cigarette boxes. I’m not particularly interested in donkeys and bullet-riddled concrete dividers, but looking at the individual screws in the skeleton skull of “The Interpreter”’s teeth or the muscle fibers in the arms of the “Campaigner,” I got hyped. His obvious enthusiasm for material comes off as refreshingly genuine and earnest, and keeps the vomiting albatrosses and neon dung piles and fossils seeming playful and thoughtful rather than vulgar or parochial.

The largest exhibit of Baldwin’s work, this show contains his many major works of the past two years — drawing and sculptures. The space at LOT is a perfect scale for his work, and the show is well laid out and logically organized. Baldwin packed the show and drove it from Richmond to Louisville in order to show at LOT after an artist friend of his recommended the gallery as a unique venue in the region. Having never shown all of these works together, Baldwin says the opportunity to do so at LOT allowed him to understand his work in a new context.

“The Interpreter,” a piece that, when shown in the summer of 2010, originally read like a knee-jerk response to the BP oil spill in the Gulf, reads differently now. When I spoke to Baldwin about his experience in Louisville, he seemed completely enthused. “I didn’t really know much about Louisville outside of the music scene before I came, but what I enjoyed was how the audience there really took time to look at my work, which is an incredibly gratifying thing for an artist.”