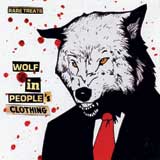 As far as Christmas presents go, receiving Louisville folk artist Patrick Thompson’s lo-fi recordings as Rare Treats was a nice surprise under the ol’ LEO tree. His bio states that Thompson “wanted to make a record that didn’t sound entirely like it came from Louisville, Kentucky,” and by that standard, it mostly succeeds. Though traces of ’90s forerunners can be detected, the Rare Treats blend of DIY punk, metal, art and underground riffage reduced to the most basic elements is more reminiscent of the underappreciated Wipers or very early Sebadoh than Slint or Rodan. Though distortion is employed, melodies remain clear and purposeful, and Thompson’s relaxed approach is a welcome change of pace from the many careerist bands who put too much effort into sounds unworthy of big, expensive productions. This Wolf manages to simultaneously sound as fresh as tomorrow and as authentic as a lost 1991 recording, demonstrating that whatever you think the Louisville sound is, those sounds can always surprise you.