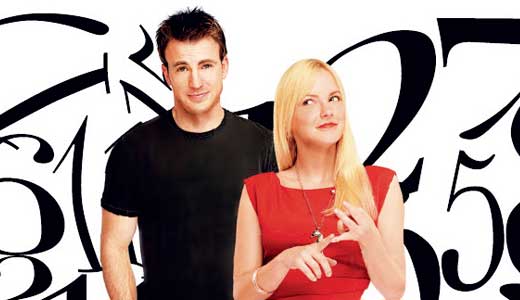 Brad Pitt and Philip Seymour Hoffman star in this sports movie for people who hate sports movies. They play the real life respective general manager and field manager of the Oakland A’s, a team about to go out of business until Pitt hires yuppie economics prof Jonah Hill. That’s when he decides to buck common sense and hire a bunch of losers and misfits who are “undervalued”: They work cheap but, statistically at least, might deliver the goods. We don’t know about good baseball, but it does make for one damn entertaining flick.

This surprisingly funny chick-flick finds Anna Faris trolling back through all her “exes,” re-evaluating them in hopes of finding her own Mr. Re-Right. The cracker-jack co-stars — including Chris Evans, Ari Graynor, Blythe Danner and Ed Begley Jr. — add to the fun, especially Evans, the different-woman-every-night neighbor who agrees to help her in her search.

Ricky Gervais and Stephen Merchant, who together created “The Office,” are having a ball off-screen as they play an extended practical joke on pal Karl Pilkington, sending him on a ’round-the-world trip, completely against his will. He suffers through jungle treks, real cannibal tribes, camel rides across a burning desert, dining on everything from toads to goat testicles while they stay home and screw with him by satellite phone. This is why Brits are the funniest people on earth. Recommended.

Steve Buscemi was born to play Enoch Nucky Thompson, the real-life power behind Atlantic City of the 1920s in this HBO series. Outwardly, Nucky was the loyal city treasurer, but to his inner circle, he was a criminal mastermind who could cut a deal or a throat with equal aplomb. Directed by Martin Scorsese; one of the best-written, best-cast shows ever broadcast in any medium. Our highest recommendation.

DIARY OF A SINGLE MOM

Director Robert Townsend presents this tale of three urban women — Monica Calhoun, Valery M. Ortiz and Janice Lynde — struggling not just to survive, but to teach their children to be compassionate, caring and self-sufficient. With Leon, Richard Roundtree and Billy Dee Williams as the men in their lives.

This legendary indie Japanese import melded Western mad-slasher traditions with Eastern horror tomes to create something truly frightening. A group of teenage girls hide away in an isolated house to rehearse and film their own movie. Their chaperone tells them that a previous trip left one girl dead and another insane, but that they are perfectly safe now. Then they find the videotape of the violent lunatic in the demon mask. Bwahahahahaa.

The new “Five-O” is kinda fun (particularly hot little Grace Park — wow!), but it can’t hold a candle to the original. For 12 seasons, Jack Lord starred as the head of the governor’s private state police unit, with wide-ranging powers to stop organized crime anywhere on the islands. It became the prototype cop show of the ’70s, with action, drama, intrigue, violence and sex at every turn — plus all those beaches! All 281 episodes on 72 discs. That’s less than a buck an episode!

Tom Shadyac, director of such films as “Ace Ventura,” suffered a concussion in a bike accident a while back. His recuperation gave him time to reconsider how he and most of the world spend their lives. He decided that we all kinda sucked — and set about to find a better way to live. This doc follows his search, drawing in such “significant minds” as Desmond Tutu, Noam Chomsky and Morgan Freeman. Among other things, he considers why we strive to become wealthy when the only thing we really need is each other and a clean place to live. Upbeat, fun and never preachy.

Not to be confused with the Sam Peckinpah classic of the same name, this finds Jason Statham as a British Elite Special Air Service vet who must take up arms (surprise!) to rescue his former partner, Robert De Niro, from the evil, mustachioed Clive Owen. A treat for hard-core action fans.

While the laughably low-rent re-enactments of 6th century British battles were sometimes distracting, we thoroughly enjoyed this boxed set of five A&E cable-TV specials that explore both the fact and the fable of King Arthur. Of special interest was the surprisingly beautiful and sophisticated period armor now kept in the Austrian Graz Museum, and the thought that the Holy Grail may be there, too.

No one does solid science docs like PBS, and this is one of their best. Using a combination of state-of-the-art CGI, never-before-seen telescopic imagery and analysis by the world’s top astrobiologists, we learn — in practical, concrete terms — what life may exist elsewhere. What could be more entertaining?

THE SUMMER OF MASSACRE

Horror-vet Joe Castro returns to write and direct this very original slasher tale, the first-ever slasher anthology! A total of eight killers inhabit five segments, racking up an unprecedented 150 gruesome, violent, painful, blood-soaked dismemberment deaths. We’re hoping his next film is a musical. Now that would be cool.

This is one of the most challenging, intelligent and impressive movies we’ve ever seen, but if you ask us why, we’d be hard-pressed to give you an answer. Director Roland Joffe sets Charlie Cox, Wes Bentley and Dougray Scott on a voyage of personal and historical discovery during the bloody Spanish Civil War. A young journalist searches for clues to the relationship between his estranged father and his friend, a candidate for canonization. We thought it was great, but it’s just very hard to categorize. Your thoughts?