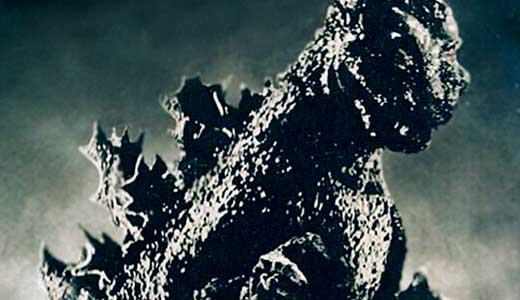 What more could we possibly say that hasn’t been said before? How about “now available in a definitive Criterion Blu-ray Collection!”? Contains Ishiro Honda’s original 1954 Japanese-language guy-in-a-suit masterpiece, and the better known but far, far inferior 1956 American version, “Godzilla: King of the Monsters,” that added Raymond Burr to the cast — PLUS the best set of behind-the-scene and bonus goodies we’ve ever seen! Owning this set should be a condition of citizenship.

Hugh Jackman and noisy Dakota Goyo star in this kid-friendly tale of washed-up people and shiny boxing robots. A lot of people shat on this movie, complaining that “because the robots can’t be hurt, there’s no tension.” That’s BS: You do come to care about the ’bots, especially Atom, the scrappy little mechanoid who leads to Jackman’s kid-fueled redemption. That’s not to say that this is the greatest movie we’ve ever seen, but for the kid-to-tween crowd, it’s much better than you’ve heard. We liked it.

Joseph Gordon-Levitt is spectacular as the young man whose life crashes after being diagnosed with terminal cancer, but it’s Seth Rogen as his crazy man-child best friend who keeps this dramedy from tanking. Of course, having gorgeous Anna Kendrick and Bryce Dallas Howard to hold your hand don’t hurt none, neither! An impressive cast, great writing and a surprising lack of weepy sentimentality make this a minor gem.

Woody Allen’s modern romantic masterpiece, now on Blu-ray. Dianne Keaton simply glows as the wholesome, chatty Midwesterner with an odd sense of style who falls for Allen’s neurotic Manhattan TV comic. But that’s not the end of their story as families, anti-Semitism, over-intelligence, holidays, childhood memories, dinner tables and all the other trappings of modern life gang up on them. To say more would spoil one of the great experiences of moviedom — just go buy it.

We loved this serio-comic tale of life, love and the power of the press set in a modern prep school. Ezra Miller plays a student newsman, booted from his school paper by the preppy editor. So he fights back in the form of his own underground press aimed at all the losers, nerds and dweebs who have been without a voice for too long. Just too cool. With Zoë Kravitz, Amy Sedaris and Jesse McCartney. Recommended.

BUCK ROGERS IN THE 25TH CENTURY: SEASON ONE

Gil Gerard starred as the titular spaceman in this famous TV revival harking back to the days of movie serials. But it’s leggy Erin Gray, the former Virginia Slims model in her shiny, skin-tight, one-piece jumpsuit as Colonel Wilma Deering who everyone remembers — Yeah, baby! Wooo! Man, she was hot! — a point that was not lost on the producers who brought in eye-candy guest stars like Jamie Lee Curtis, Julie Newmar and Pamela Hensley (“Princess Ardala”) each week. A veritable sci-fi cheesecake, now available on six discs.

Willowy Agnes Kittelsen stars in this sunny Norwegian dramedy as an eternal optimist in a family full of jerks. Then one day a new family moves in next door, and they are not only perfect in every way, but their lifestyle opens up new vistas she never dreamed of before. Sound dull? Trust us, this is a mature, funny and intelligent movie that you’ll be telling all your friends about — just like we’re doing now.

A biodrama about the family of musical genius Wolfgang Amadeus Mozart, and in particular, his elder sister Nannerl, who may have been an even greater genius than her brother, but had the great misfortune of being born with a vagina during the 18th century. The most engrossing two-hour French movie you’re ever read.

Louisville-born director Gus Van Sant’s mystically tragic first-love tale starring Henry Hopper (French Stewart’s stepson) and Mia Wasikowska from “Alice In Wonderland.” She is terminally ill, and he has a penchant for attending funerals of people he never met. Oh yeah, he also gets dating advice from the ghost of a WWII Japanese Kamikaze pilot. While aimed at adults, this should be a big hit with the tweeny crowd.

This big-budget/big-star comedy tanked at the box office, probably because it’s just so uncommonly nice. Owen Wilson, Jack Black and Steve Martin play “birders” — bird-watchers to you — who competitively seek out the rarest birds in America as part of an annual competition. The fun is in how these three too-tightly wrapped individuals out-flank each other with the help of family and friends. A quiet, mild-mannered comedy from director David Frankel (“The Devil Wears Prada”) with John Cleese, Kenny Bostick, Rosamund Pike, Kevin Pollak, JoBeth Williams and a host of others.

Rachel Weisz leads an all-star cast in this true tale of a U.S. cop working for a “private security contractor” in post-war Bosnia. There she hopes to earn some money, do some good and recover from the pains of a shattered marriage. Instead she uncovers human trafficking, with young girls sold into sexual slavery by the very firm she works for — and the authorities have no interest in stopping it. With Vanessa Redgrave, David Strathairn, and Monica Bellucci.

Pollyanna McIntosh is amazing in this very rough tale of a feral Australian woman, captured, raped and tortured by a controlling family-man who hopes to “civilize” her. Meanwhile, his wife and oldest daughter come to identify with the defiant wretch, seeing themselves as being as captive by society as she is by chains. The teen boy, however, has a different opinion. Not for everyone, but compelling stuff from the always provocative Lucky McGee.