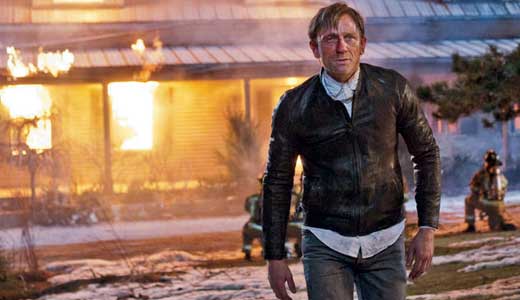 Real-life husband and wife Daniel Craig and Rachel Weisz would seem to have it all in this sneaky psychological/supernatural horror outing: a perfect marriage, a perfect family and now the perfect house. But we won’t spoil the movie’s twist in these pages (the studio did that well enough in their ham-handed trailers). Just let it be said that things are not always what they seem, especially when the cast includes Naomi Watts and Elias Koteas, and there’s an Oscar-nominated director at the helm. Not a perfect movie, but with all that talent, it’s certainly worth a look.

There have been two excellent movie treatments of John Campbell’s seminal short story, “Who Goes There?”: One in the ’50s by Howard Hawks and the other in 1982 by John Carpenter. The latter sets the stage for this prequel, which we know will kill everyone at the Norwegian Antarctic outpost and release a shape-shifting alien juggernaut on Earth. But that foreknowledge doesn’t diminish the fright factor one iota as Mary Elizabeth Winstead leads a determined, isolated crew out to save the planet at all costs. A perfect addition to the canon. Recommended.

Lovely Felicity Jones — who you’ll see more of in the upcoming “Invisible Woman” — stars in this lighthearted bit of fluff about a former urban “champion skateboarder” who finds herself catering at a posh resort in the Alps. OK, so it’s stupid; it’s still a lot of fun as she confronts love, fears and family for one more shot at the big time — a snowboarding competition! Solid family fun with Ed Westwick, Bill Nighy and Brooke Shields.

Some people were angry when they discovered that this wasn’t another “Fast and Furious” car-crash movie, but they missed out on a solid crime drama with raw, ’80s-era sensitivities. Pro stunt driver Ryan Gosling moonlights by driving escape vehicles for criminals, until he meets beautiful Carey Mulligan and must protect her from a job gone wrong. Albert Brooks and Ron Perlman make brutal yet interesting gangsters with help from the always aromatic Bryan Cranston. Recommended.

We were fascinated by this brief (35-minute) look at the life and teachings of Confucius. Steeped in classic Chinese values of family, history, remembrance and spirituality, the viewer comes to realize how insignificant one’s life can be without an understanding of their place in the universe. Confucius boiled these truths down to four simple essays, which are as important and life-affirming today as they were 2,500 years ago.

A real nice indie actioner with supernatural overtones set in the Florida Everglades. Three buds go hunting, only to see bails of drugs being dropped from a plane. Should they report it to the law, or snatch the drugs themselves and make millions? And why does one of the men seem to have a guardian angel? We liked it.

Abigail Breslin and Brittany Snow are terrific in this tale of a worn-out rocker (Alessandro Nivola), his former groupie (Snow) and their daughter, which he never knew he had. Yeah, we know, it sounds like every crappy Lifetime cable movie ever made, but this one is serious: Half the characters are drug addicts, and poor life choices abound. But Nivola and Breslin are terrific together — they even sing and play their own instruments as they find ways to bond and forgive her mother for abandoning her. Worth your time.

The long awaited Blu-ray release of Spike Lee’s bioflick, written by Alex Haley and starring Denzel Washington, who is phenomenal as the charismatic and controversial spiritual/political leader killed by black extremists at the age of 39.

Over the years, PBS’s “Masterpiece Theater” has lived up to its name by importing some of the greatest television from around the globe — and this may be its best ever. Often called a British “Gone With The Wind,” it tells the fascinating tale of family struggles in Cornwall after the American Revolutionary War. Robin Ellis plays Capt. Ross Poldark, who returns from the war a celebrated hero only to find his inheritance gone, his estate all but uninhabitable, and his girlfriend engaged to another. Twenty-five fascinating hours on eight discs.

Sam Worthington, Jeffrey Dean Morgan and the always-amazing Chloe Grace Moretz star in this surprisingly good indie tale of cops and serial killers and their victims set in the Texas bayous.

If you’ve never heard of “The Comic Strip Presents,” England’s second-most-celebrated cult comic TV series, then you weren’t watching MTV back in the ’80s! Besides being funny as hell, it launched the careers of Robbie “Hagrid” Coltrane, Jennifer Saunders and Dawn French of “Absolutely Fabulous,” and Rik Mayal, one of Britain’s most prolific movie and TV writers. All 39 episodes (some never seen in the U.S.), and a wad of terrific bonus goodies. Not to be missed.

First-ever Blu-ray release of this weird sexual fairytale starring Holly Hunter, Harvey Keitel, Sam Neill and Anna Paquin. Works as a first-class chick-flick yet unfolds like one of Playboy’s Ribald Classics — it’s also a damn good movie. Did we mention that?

Thirty-five years ago, Prof. Conrad Johnson, band leader at a struggling Texas high school, saw Otis Redding perform and decided to show the world what his kids could do, turning their student jazz band into a now-legendary funk powerhouse known as the Kashmere Stage Band. Many of the members went on to become professional musicians, and the albums the group recorded have been embraced by a generation of hip-hop musicians who continue to use samples of their unique sound. This doc records their 2008 reunion where they honored the 92-year-old professor and made some mighty noise.