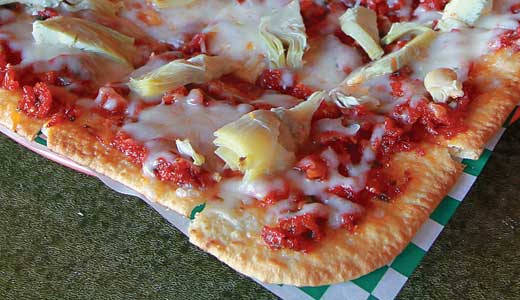 In the ancient Bible story of the exodus, when Moses encountered a burning bush in the desert on Mount Sinai, it was a transforming event. The voice of his creator directed him to face down Pharaoh and lead his people to freedom. Now, that’s serious stuff.

In the 1986 comedy classic “The Three Amigos,” when Chevy Chase, Martin Short and Steve Martin encountered a singing bush in the Sonoran desert, it was a slapstick moment. They got a wacky a capella concert of golden oldies. That’s something, anyway.

When Mary and I trekked out to Prospect recently to check out Burning Bush Grille Mediterranean Café, we got lunch. It was OK. It wasn’t slapstick, but it fell well short of being transformational.

Burning Bush is in Hunter Ridge, a new shopping strip on the right as you go out U.S. 42, just after the four-lane highway ends at the Jefferson-Oldham County line beyond Prospect. The venue occupies a fair-size storefront, and the setup is a bit like a burrito joint (or Uncle Maddio’s pizza): You file down one side of the room to a serving counter at the back, where rather taciturn workers dip ingredients out of square pans to assemble many of the dishes. An oak-charcoal grill comes into service to fire meats and other goodies with smoky tastiness.

The main dining area is divided into halves by large, square wooden booths with vertical backs that looked uncomfortable; we chose a free-standing table furnished with orange plastic patio chairs. The tabletops are a coarse-grained material that unfortunately seemed a bit resistant to wiping as shiny clean as we’d have liked.

The menu features a mix of cuisines that stretch across the Mediterranean — from Spain (well, actually Peru) for dishes made from the Andean grain quinoa (“Keen-wah”) through Greece (gyros, Greek salad and more) to Southwest Asia and Armenia. About three-dozen items range in price from a downright cheap $4.01 (for falafel on pita) to a still reasonable $15.09 (for a steak and chicken “Kombo” with sides of lavash, rice, veggie kebab and tzatziki sauce).

There’s a children’s menu for those 12 and under, $2.83 per plate assuming your child is the kind of youngster who wants grilled cheese or chicken fingers. The dessert list includes homemade baklava ($2.59), Gelato Gilberto and, in a nod to history, Kern’s Kitchen Golden Pecan Pie ($2.59 for a slice), the modern sibling to the trademarked Derby Pie that was served for generations at the old Melrose Inn that long stood nearby.

We went through the line, got our number and settled in to wait and watch TV. We waited a while and finally got our goodies delivered by a smiling, chatty server — first one of those we’d seen.

The falafel ($4.01) was OK — three rounds of deep-fried chickpea dough were properly crunchy, albeit so flattened that their predominant flavor was fried crust. They were served on a bed of fresh, green chopped romaine, with pale diced winter tomatoes and a dollop of something more akin to sour cream than tzatziki, all assembled on a toasted but soft pita that reminded me of a thin hamburger bun.

The ground bison kabob ($6.13) was a single flat “finger” of Kentucky Bison Co.’s finest, savory but grilled well-done and quite dry, served atop a soft pita rectangle cut to fit, served with a ration of decent basmati rice, a lemon wedge, a roasted tomato half, and a few thin slices of onion, a tiny cilantro sprig, and a small plastic vial of … tzatziki? Again, it seemed more like sour cream, maybe laced with a little mayo. A side order of quinoa tabouleh ($2 for a half-order) would have been better as compost fodder; it was limp and funky from, we guessed, an overnight stay, or maybe two, in the fridge.

Don’t expect an Italian-style pizza experience from the artichoke heart “pizza” ($8.49), but it was a pretty darn good rectangle of paper-thin lavash topped with just enough of an excellent tomato sauce laced with basil and garlic, molten stretchy cheese, and a good ration of quartered artichoke hearts, cooked until the crust was shattering crisp. Two thumbs up on this dish.

Lunch for two came to $21.87. That’s really two lunches, as we could easily have gotten by on either the kebab and falafel or the pizza alone.

Burning Bush is a perfectly good place to stop for a quick, affordable, Middle Eastern-Mediterranean meal, especially if you’re in the neighborhood. Still, after taking a look at the rather picked-over gelato pans, we decided to head cross-country to Norton Commons for a cup or two of fresh gelato at the mother ship, Gelato Gilberto (9434 Norton Commons Blvd., 423-7751, gelatogilberto.com), where we got service with a smile and some really delicious Italian ice cream. I recommend the straciatella, the Italian progenitor of chocolate chip, $3.25 for a discreet little kiddie cup.