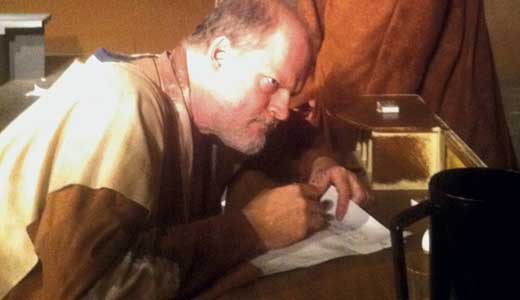 ‘Some Things You Need to Know Before the World Ends (A Final Evening with the Illuminati)’
Written by Larry Larson and Levi Lee. Directed by Joey Arena. Continues through Jan. 21 at the Alley Theater, 1205 E. Washington St. For tickets or more info, call 713-6178.

Over the last couple of years, the Alley Theater has made a name for itself in the local arts scene through its innovative approach to pop culture-inspired theater, and when, between remounts of live-action action films and zombie musicals, they sneak in a script by a serious dramatist like Stephen Adly Guirgis, I’m always interested. When I heard the Alley had a production of Larry Larson and Levi Lee’s 1986 Humana Festival play “Some Things You Need to Know Before the World Ends (A Final Evening With the Illuminati),” I was intrigued. In 1986, I was only 10 years old, and it would be years before my parents allowed me the pleasure of sacrilegious doomsday entertainments. And on brink of 2012 and the eve of the big UK-U of L basketball game? What a perfect choice.

And yet, when a show goes so quickly and thoroughly off the rails as Joey Arena’s production of “Some Things You Need to Know …” did, it’s rare that there’s one root cause. As far as I can tell, a lethal combination of a dated script, lackluster direction, paltry production values and actors working beyond their experience did this excruciating show in. I know I’m not alone here — a third of the admittedly small audience left during intermission. I struggled with writing this review, because I don’t know what good it can do to dwell on a bad production’s many flaws, but I keep coming back to the Alley’s potential and the many ways the leadership failed its audience and its company by allowing this production to go up in its current shape.

“Some Things You Need to Know …” takes place in the dilapidated, trash-strewn sanctuary of Brother Eddie (Paul Curry), a paranoid Protestant minister dodging suspected members of the Illuminati (a cult of Bavarian powermongers from the 18th century that conspiracy theorists believe basically run the world even today) while preparing his final masterpiece sermon, “Life is Like a Basketball Game” and flagellating himself, all with the help of his “hunchback” acolyte Brother Lawrence (J.P. Lebangood). Brother Eddie preaches from a spray-painted pulpit at the congregation (the audience) between berating Lawrence and enduring feverishly comic hallucinations featuring gay saints and fringe-wearing Lutheran cowboy singers.

All of which sounded pretty promising, to tell the truth.

As it turns out, the script is awfully dated, full of theological challenges that might have been daring in the mid-’80s but are old hat in a post-Kevin Smith entertainment landscape. So the jokes fall flat because they don’t surprise, and the Illuminati business now sounds silly and kind of Tom Hanksy thanks to those Dan Brown books. In more capable hands, the play could still be a satisfying two-hander showcase of comic acting (think better productions of “Greater Tuna”), but unfortunately, Arena’s cast lacks the experience and range necessary to make this kind of script work. I can’t fault the actors — you’re cast, you do the best with what you’ve got. But while Arena’s successful productions of “Evil Dead: The Musical” speak for themselves, perhaps his talents are more suited to mounting campy, gory musicals than directing two hours of hardcore acting.

A bad play certainly isn’t the end of the world, but it sort of feels like it in the moment, and that makes me less than eager to return to the Alley for future productions. I’m writing this to ask the artistic leadership to exercise some quality control and step in if a show isn’t living up to its potential. I want to see the Alley succeed artistically and continue to present challenging shows, but not at the expense of its actors or its audience.