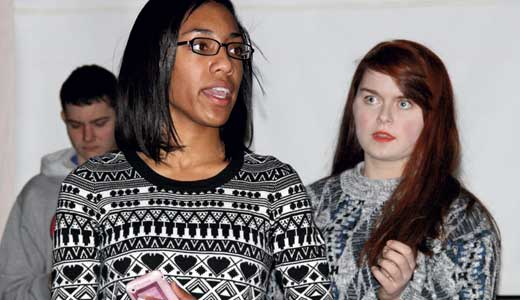 When “beware the ides of March” pops up all over Twitter, you know somebody’s in trouble. But it’s cool — Brutus and all of Julius Caesar’s other buddies will have his back … oh. The latest piece in Walden’s Cornerstone Classics Series, William Shakespeare’s “Julius Caesar,” illustrates the tragic fate of the Roman statesman and demonstrates the fear of tyranny and the inevitable tendency of emotion to prevail over logic in society. This historical piece stems from the impending end of the Elizabethan monarchy, and its themes are still relevant to today’s politics. Director Alec Volz sets the play in the year 2012, complete with camera phones and live video, and he has cast an uncommon actor to play the title role — a woman. While Volz’s artistic choices for this play may be daring and innovative, Shakespeare’s storyline is nothing we haven’t heard before — over and over and over.

It is Volz’s hope that the modernization of the play will help audiences, both young and old, grasp it better and be able to connect the plot with current political events. In addition to the performances at Walden, the cast will perform to a sold-out audience of local high school students who have likely read the play in their English classes.

“What we’re about at Walden is clarity,” Volz says. “I didn’t want to have another year of kids who walk away from ‘Julius Caesar’ going, ‘Oh, that’s just boring and stupid.’ If I can make it as relevant as possible to all those 1,500 high school kids that are going to see it at the Brown, and the people that come to see it here at Walden, it’s a win.”

The play’s poster, which is an obvious adaptation of the iconic Obama “hope/change” image, has already gotten a lot of attention, according to Volz. The face on the poster is Walden student Kyra Riley, a Manual High School senior who plays Caesar.

“The coolest thing about being Julius Caesar is that I have a lot of responsibility to the audience,” says Riley, “to make them think about something different, and about today’s politics, the election and Obama.”

Riley was surprised to receive the role, which Volz had decided to give to the most fitting actor, regardless of gender. Volz says it is easy for him to place a woman in a role typically played by a man, especially when the play is modernized.

“All I have to do is change pronouns,” he says, “because women today are not the chattel that they were in Shakespeare’s time. Especially in a political place such as this, there’s no reason why Julius Caesar can’t be a woman.”

The most challenging part for Riley, she says, is playing the role of an individual who is historically so powerful. Some of her peers were surprised she was cast as Caesar and even questioned whether she could pull it of. In her six years at Walden, this is the biggest role she’s ever played, and it has allowed her to discover more about herself as an actor.

“I’ve learned that I probably have more power onstage than I thought,” she says. “I didn’t really know my abilities, and I think this play has allowed me to bring them out, and allowed me to recognize what I can actually do in theater and what I can contribute.”

In preparing for the play, the cast researched current events and had political discussions, in addition to breaking down the complex Shakespearean text. They wanted to really understand what they were saying, what their characters wanted, and how the issues the play addresses reflect current affairs.

“I just want people to recognize just how relevant it is to today’s politics,” says Riley. “Hopefully a lot of high schoolers would maybe be more interested in politics and want to watch the news more or read the newspaper. The whole point of theater is to get people to think about something differently, maybe to act on it.”