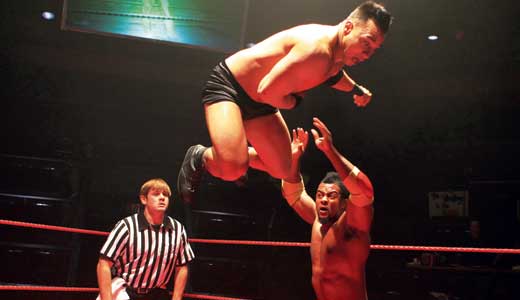 ‘The Elaborate Entrance of Chad Deity’
Written by Kristoffer Diaz and directed by K.J. Sanchez. Continues through Feb. 4 at Actors Theatre of Louisville, 316 W. Main St. For more information, call 584-1205.

File the following under “Things I never expected to see at Actors Theatre of Louisville.” Sequined mini-dressed hip-hop dancers executing perfect, synchronized death-drops. A charismatic celebrity “making it rain” with phony Benjamins boasting his own portrait. Cheers so loud you’d think Rick Pitino himself did the pre-show speech. Violent booing. Fights. Three full rounds of (I swear on Jon Jory’s beard) the Wave.

If you’re thinking all of this sounds way too exciting to have happened during a play, you’re right. We go to the theater hoping to feel many things, but rarely do we expect, demand and experience sheer exhilaration. Playwright Kristoffer Diaz has upped the game with “The Elaborate Entrance of Chad Deity,” an incisive examination of racial politics and identity through the lens of professional wrestling. Directed by K.J. Sanchez, “Chad Deity” stages the most exciting parts of a live pro sports event while giving the audience an all-access pass to a stirring and contemporary backstage drama.

OK, let’s add one more thing I never expected to see on stage at Actors Theatre: professional wrestling. But just like our hero Macedonio “The Mace” Guerra (Alex Hernandez), growing up in the ’80s I watched the hell out of pro wrestling. The stories — there’s a plot, even if the denouement is always one guy kicking the shit out of another — were more exciting than soap operas and more fun than boxing because we knew the fights were choreographed. I didn’t really want to see anyone get hurt, I just wanted a story with stakes.

And so elaborate, making-it-rain entrances aside, I was right there with Mace when he told the audience of his childhood love of the big show that he turned into a career as the smaller, technically proficient wrestler who makes the pumped-up stars look good. And the biggest star in The Wrestling organization is Chad Deity (Kamal Angelo Bolden), a superhuman chiseled hunk of All-American trash talk and flash. As the announcer says, “Charisma owes Chad Deity money.” When Mace discovers Vigneshwar Paduar (Ramiz Monsef), an equally charismatic Indian b-boy from Brooklyn, he brings his protégé in to meet boss Everett K. Olson (Lou Sumrall) in hopes of bringing the Deity juggernaut down. What he gets instead is a racially problematic televised storyline that exposes just how complicated his rise to success would be and how many compromises he and Vigneshwar must make to their own stories in service of the boss’ perverted version. Behind all of the spectacle that Diaz and Sanchez deliver (including Jamin Olivencia, an Ohio Valley Wrestling star), there’s a hell of a lot of substance.

As Mace, Hernandez gives us an earnest and complex hero, the perfect foil to Bolden’s seemingly effortless style. Last seen as an acting apprentice in last year’s company, Hernandez stepped into this starring role at the last minute (no, really — three days before the first preview, in a backstage plot twist worthy of The Wrestling itself) and yet acts like he’s been playing this role for years. Bolden and Monsef both turn in hilarious and powerful performances, and Sumrall is delightfully bombastic as an oversized mogul whose assistants roll him around in a desk chair, too important to walk his own steps.

Many kudos go to the design team for transforming the Bingham Theatre into a bloodthirsty arena, especially Matt Callahan’s exuberant sound design and Michael B. Raiford’s set, which undergoes a second-act dramatic transition through an elaborate entrance of its own.