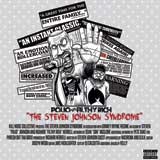 Polio has stepped up a lot in the couple years he’s been on the radar. He started as almost a court jester, a foil to the seriousness of the rest of his crew, specifically Scanners’ Nacirema. On Syndrome, Polio expands his subject matter and raps with an urgency that’s impossible to deny. “Infectious” is the centerpiece to the record, an up-tempo with live cuts from DJ Calcutta and guitar from Jack Kicklighter of Actual People, epic in scope and an agile workout for the nimble Polio. Blink, but don’t miss this one; a quick and dirty release, Polio says everything he sets out to say in 20 minutes. While these ears are left wanting more, the sheer economy here means you hang on every word, beat and sample. Filthy Rich lays a diverse bed of tracks for Polio here, ending the year on a high note after producing both the excellent Hippiedigger and Murkatroid albums. With his “main” group Actual People’s album promised at the first of the year, 2012 already looks good.