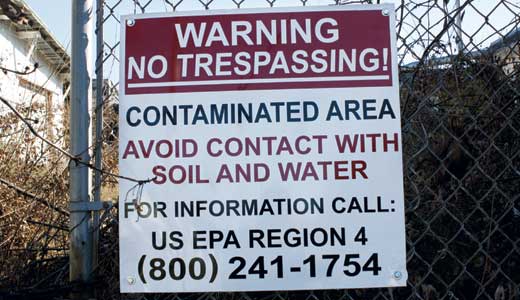 On a warm December day, 60-year-old Marvin Hayes points to the fertile corners of his sloped front yard.

“Tomatoes over here, cayenne peppers over here,” he says looking down at a cluster of winter-worn, brown plants. “Berries over here.”

He grows produce almost every year and has never questioned the quality of his soil. But this month, the Environmental Protection Agency will do just that. The EPA is scheduled to take soil samples from 85 properties in the Park Hill neighborhood, including Hayes’ yard.

It’s not a surprise. Just a few feet from Hayes’ property, a relatively new sign hangs on a locked chain-link fence that leads to an abandoned industrial park. It warns the public of on-site contamination at what’s now known as the “Black Leaf” chemical site, named for an insecticide once produced there.

In November, the EPA hosted a community meeting to explain what’s going on: From the 1920s through the 1950s, several companies formulated pesticides at the site. Now-banned toxic substances like DDT, dieldrin and benzene hexachloride were all used at the facility. A half-century later, soil samples taken in 2010 showed high levels of pesticides remain.

Surface soil directly adjacent to the main manufacturing building had the most potent levels — anywhere from 200 to 18,000 times the concentration level that would normally alert the EPA to a likely contamination problem.

Smaller amounts of pesticides were also found close to homes, as were heavy metals like arsenic and lead. One sample from an alley showed a lead concentration at almost twice what the EPA considers in need of cleanup. The arsenic level was up to five times higher. Heavy metals are common in the industrial manufacturing of pesticides.

During the November meeting, Hayes received materials that listed potential health hazards caused by heavy metals, like developmental problems, and impaired cognitive and motor skills. He circled them in blue pen. At the top of the sheet, Hayes jotted questions for the EPA. The first: Why has this taken so long?

“They were kind of like, ‘Well, we’re here now,’” Hayes recalls.

Art Smith, the EPA’s on-site coordinator for the cleanup, admits there’s no “good answer” for the delay in discovering the contamination, but says there’s been a rapid response since the test results came back.

“I’d say it’s rather uncommon, the fact that it took this long,” Smith says.

A few things likely prevented remediation sooner: Ownership of the site has changed hands frequently. The contamination may not have been glaringly severe. And last but not least — location. The old pesticide factory is tucked away in an industrial swath of the West End that’s home to several neglected warehouses and factories.

The 29-acre industrial park has housed a whiskey barrel manufacturer, lumber mill and electrical contractor company since opening in the late 1890s. A largely African-American neighborhood lies to the north, other industry flanks the east and west, and a large rail yard sits to the south.

From the 1920s to the 1950s, a nicotine-based insecticide called “Black Leaf 40” was manufactured there. According to the EPA, throughout the 1950s, four other chemical companies also operated at the site making chlorinated pesticides.

In 1987, nearly three decades after the pesticide manufacturers had closed, the EPA conducted a visual assessment of the site to determine whether it was a candidate for a federal cleanup. Investigators decided no further action was needed.

For whatever reason, no soil samples were taken. Tim Hubbard, the assistant director for Kentucky’s Division of Waste Management, says if soil had been tested, a cleanup may have been initiated long ago.

“Certainly that’s the missing piece of information,” Hubbard says. “No one really knew for sure if there were levels out there that would be a problem.”

So it sat. For another two decades.

The correlation between low-income, minority neighborhoods and pollution is well documented in Louisville and across the country. In a letter from the state to the EPA, the neighborhood bordering the industrial park is referred to as a possible “environmental justice” area, coinciding with the federal agency’s movement to focus on the disproportionate exposure to contamination in high poverty areas.

State environmental officials seek EPA grant money for reassessments of potentially contaminated sites. That, in part, is what reignited interest in Black Leaf in 2009. It was around this same time that the current owners of the industrial park, Louisville Industrial Park LLC, floated interest in building low-income housing on the site. (A request that was denied.)

During a 2009 site visit, inspectors with the Kentucky Division of Waste Management found drums containing hazardous waste. Some were leaking. Those drums were immediately removed.

In 2010, soil samples were finally taken and showed high levels of contamination around the main manufacturing building. The following year, the state asked the EPA for a “time-critical removal action.” In other words, they wanted it cleaned up immediately. In the summer of 2011, the EPA deemed it a Superfund removal site, meaning the federal government will oversee the cleanup.

Smith says a June 2011 LEO Weekly article about urban exploration in Louisville caught the EPA’s attention and ratcheted up concern. He says they weren’t aware that the industrial park had become a destination for adventurers and graffiti artists. Over the summer, all entrances to the site were secured.

“We’re concerned about public safety,” Smith says. “If there’s pesticide contamination out there that’s certainly something we would want to try and prohibit and encourage people to stay out.”

Pesticides used at Black Leaf have been linked to cancer and other health problems.

The urban explorers, as well as copper thieves, often used an opening to the industrial park near Hayes’ home. He says that, along with two fires, are what have made him uncomfortable with the abandoned park since moving in 30 years ago. Also, a roof on an old warehouse has been shedding nails and tiles into his alleyway.

Those are the tangible nuisances. As far as potential contamination of his soil from airborne particles and storm water runoff, he’s not overly worried.

“I guess we’ll wait until they finalize their sample testing, and we will go from there,” Hayes says. “I’m not fearing yet. But I’m waiting.”

According to Hubbard, the very intent of pesticides may help in this situation. Pesticides typically bind to soil. So hopefully toxic chemicals have remained on site and not scattered to surrounding homes.

“That’s the purpose of the pesticide … once you apply it, then it stays there and it acts to treat the pest,” he says. “It’s long lasting. It’s going to stay for awhile.”

Still, the arsenic and lead found near homes is of concern. The EPA is waiting on a few dozen permission letters from homeowners before they start sampling this month. Those tests should help determine if there’s been a wide distribution of chemicals and heavy metals.

As far as who will pay for this cleanup, Smith says the EPA is still negotiating with potential responsible parties, including the current owners and former pesticide manufacturers. The government may also end up footing the bill.

Michael Dean worries about cost, not in the financial sense, but health-wise. He’s a community activist with the neighborhood group California Collaborative. Dean attended the November informational meeting and walked away with the sense the EPA was more interested in getting permission to test soil in yards than candidly discussing potential health risks posed to families.

Perhaps they didn’t want to alarm anyone, he thinks. But as the process continues, Dean hopes neighbors will finally learn exactly what they’ve been living next to all these years.