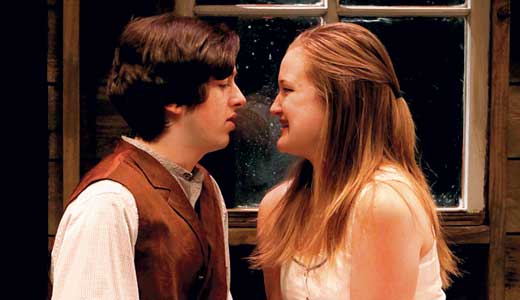 Former Christina Ricci fiancée Owen Benjamin is also known for his comedy, including a Comedy Central special and appearances on “Chelsea Lately,” “Nick Swardson’s Pretend Time” and “Punk’d,” plus 10 turns on Jay Leno’s attempt at a “Tonight Show.” He’s also an occasional movie actor (perhaps you remember his work as Marvin the Butler in “The House Bunny”?). The man legally known as Owen Smith kicks off another year of promising comedic options at our Improv, with upcoming acts such as John Witherspoon, Pauly Shore, Steve Rannazzisi, D.L. Hughley, Bert Kreischer and Andrew “Dice” Clay serving up many different styles of stand-up. Benjamin, who recently appeared in Adam Sandler’s “Jack & Jill,” made more than 90 flights this fall as he attempted to set a record for most airports visited in a month. So expect plenty of airline humor. —Peter Berkowitz

January’s a banner month in Louisville for Sarah Ruhl fans — before her Tony Award-nominated “In the Next Room (or the Vibrator Play)” opens at Actors Theatre later this month, you can check out her acclaimed and inventive re-imagining of the Orpheus story in “Eurydice” at the Alley Theater. Directed by Kathi E.B. Ellis, “Eurydice” flips the script and tells the classic myth from the eponymous heroine’s point of view, in which Eurydice falls to her death and arrives in the underworld under the care of her father, whom she doesn’t recognize, while lovesick Orpheus attempts to retrieve her by charming the underworld gods with his music (in a pre-modern Lloyd Dobler move). In Ruhl’s version, the story’s not necessarily about Orpheus’ attempts to save the woman he loves, but rather about torn allegiances between memory and moving on, between what a woman has and all that she’s lost. —Erin Keane

The impressively named Israeli guitarist Roni Ben-Hur drops in with Jeff Sherman, John Goldsby and Michael Ferraraccio for this special event, which just happens to overlap with the Jazz Education Network’s conference (see page 19 for the full story) this week. Ben-Hur, a resident of Manhattan since 1985, recently released an album, Mojave, a collaboration with Brazilian bassist Nilson Matta, and has toured to much acclaim from here to Croatia and back again. Goldsby, the bassist with the WDR Big Band in Cologne, Germany, is also known and loved around here for his 2008 recording, Live at the Nachbar, with our Jacob Duncan and Jason Tiemann. Local percussionist Michael Ferraraccio and guitarist Jeff Sherman round out the quartet, adding some Hot Brown to this smorgasbord. —Peter Berkowitz

For this special “First Friday Cantata Series” performance, a new monthly series at St. John UCC, the Period Instrument Ensemble boys are joined by soprano Kelly Ballou for two Trolley Hop-friendly blasts of baroque/classical jamz. Handel’s “Crudel Tiranno Amor” will be served up here, for those of you who totally thought Melanie Amaro killed that particular cantata on “The X Factor” — wait, what? No, she totally — well, anyway, you’ll be in NuLu, it’ll be 55 degrees outside, and this is some great culture provided by your neighbors for free in between sips of chardonnay. Everybody wins. The duo, harpsichordist John Austin Clark and violinist Nicolas Fortin, have years of education and performance experience under their otherwise relatively youthful hats, and offer Louisville hope for pre-jazz/rock music in a city with O.P.P. (Orchestra Payment Problems). —Peter Berkowitz

Joseph McGee recalls a black and white cat entering his studio nightly through a swinging door he installed. He pays homage to his “very cool” feline friend as the main character in “The Amazing Mr. Duke,” his book now on display at the Wayside Gallery. McGee promised his daughter a book as a child, and this fulfills his promise to Tasha, an accomplished fiber artist. McGee’s illustrative style brings Mr. Duke to life; the book is “a one-time thing; I like to switch around,” he says. Drawn with clean lines and accented with soft tones, colorful characters join Mr. Duke’s adventure. “In my mind, the work takes place in a nether world where Mr. Duke wants to join the circus set of Frida Kahlo and Diego Rivera,” McGee explains. The exhibit includes 26 prints with text. —Allison Ray

I love it when people say artists are a little crazy. Their willingness, craziness if you will, to self-examine creates art that can make a viewer question, well, everything. In “Autobiographies,” Joel McDonald and Sarah Lyon are giving us a peek at how they see themselves in their world. “My main theme is autobiography and identity through fiction,” says McDonald. “The story we create that defines us, how we view reality, and how we interact with the world.” His dark fantastical drawings “… show what happens when you brood.”

As a photographer, Lyon examines her world through a lens, cropping it into pieces that express more than initially revealed. She’s a traveler, no matter where she is. The opening reception is during the Jan. 6 First Friday Trolley Hop. —Jo Anne Triplett

The Carnegie Center has found something they are exceptionally good at — highlighting the fiber arts. And in this, their ninth annual “Form, Not Function” exhibition, they continue to turn our attention to the contemporary art quilt. The Carnegie defines quilt art as textiles “created strictly for their aesthetic appeal rather than functional use.” How popular are these types of quilts? There were 278 works submitted for this year’s call for art, with 24 quilts selected to display. The opening reception is Friday, Jan. 6, from 6-8 p.m. The next day, jurors Kate Lenkowsky, Marti Plager and Jennifer Sargent will conduct a tour of the exhibit from 10:30-11:30 a.m. (It’s free and open to the public, but pre-registration is required). See the website for additional events. —Jo Anne Triplett

Brazilian Renato Vasconcellos and U of L professor/sax man Mike Tracy join forces for this International House of Jamcakes, a harmonious alternative to your Sunday sports. Vasconcellos and his former teacher worked together on Tracy’s Brazilian-flavored album Tracings in 2003, so they should have a good sense of each other’s strengths — the better to swing you with. Vasconcellos now teaches jazz piano, harmony and music history at his alma mater, the University of Brasilia. He also earned a Masters of Music Performance degree (with a concentration in jazz) from our very own U of L, where he directed the Brazilian Ensemble. Vasconcellos recently produced a Brazilian Jazz edition of local godfather Jamey Aebersold’s “Play-Along” series, strengthening his local ties and contributing to the positive globalization of North and South American sounds. —Peter Berkowitz

It’s time to sing “Happy Birthday” to The Louisville Lip. Our city’s most renowned native son, Muhammad Ali, is turning 70 years old, and the University of Louisville’s Yearlings Club is commemorating this milestone. “Our Muhammad Ali: A Life, a Legend, a Birthday Celebration” will feature classmates, neighbors and friends sharing stories about the former professional boxer, philanthropist and social activist. The event is part of a discussion series focusing on black life and immigration. The Yearlings Club, a partner of U of L’s College of Arts and Sciences, is devoted to civic responsibility, community service and leadership development. The public is invited to share stories of Ali growing up in Louisville. So if you have a memory of or simply want to pay homage to “The Greatest,” this is the perfect place. —Anne Marshall

We’re barely into the new year, and Actors’ Apprentice/Intern Company already has a full evening of plays to offer. Now in its 40th year, the company has created “The Tens” from a series of original workshop ensemble productions they did last fall. The eight plays were chosen from Actors’ Ten-Minute Play Contest, and highlights include Kyle John Schmidt’s “The Dungeons and the Dragons,” M. Thomas Cooper’s “Advanced” and Jane Jones’ “DressUp.” Each year, more than 2,000 young artists audition for only 22 spots in the Acting Apprentice Company. They then get to work directly with Actors’ staff, receiving hands-on training in administrative, technical and/or artistic leadership. And probably most exciting is being able to present works like “The Tens” to the theater-going public. Tickets are free, reservations are recommended. —Sara Havens