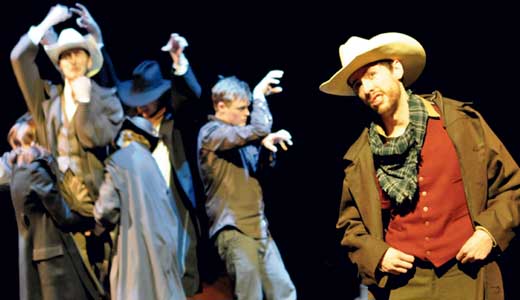 Wild and Woolly Video’s Todd Brashear sure has a fun hobby — he collects obscure and weird underground video clips and then pieces them together to create a single presentation that is guaranteed to entertain. A sampling of his collected works, dubbed the “Wild and Woolly Clipathon,” will be presented to the public at the Clifton Center tonight at 7 p.m. Part of the Wild and Woolly Film Series — which just last month brought us a Laurel & Hardy Film Festival — the “Clipathon” promises to be a wide-ranging and evocative piece of cinema that, well, you may want to watch while herbally medicated. Or not; we shall see. Oh yeah, a cash bar and snacks will be available, and it’s just $5 to get in. —Kevin Gibson

‘Fiddler on the Roof’

It’s 1905, and humble milkman Tevye has five daughters he wants to see married well by the standards of the Russian shtetl of Anatevka, but he soon finds out his children want to follow their own hearts. What else to do but dance? “Fiddler on the Roof” is one of Broadway’s most enduring and beloved musicals, with stirring songs (“Matchmaker, Matchmaker,” “If I Were a Rich Man,” “Sunrise, Sunset”) and a heartfelt theme of the enduring bonds of family and tradition that resonate across generations. Fans are in for a treat with this Broadway Across America tour, as the production features Jerome Robbins’ original Tony Award-winning Broadway choreography and direction, and stars veteran John Preece (in his 10th national tour of “Fiddler”) as the father fighting to keep his culture intact in the face of a changing and dangerous world. —Erin Keane

“Maybe It Was Memphis,” “Mi Vida Loca,” “Shake the Sugar Tree,” “Spilled Perfume” — these Pam Tillis hits were all over my mixtapes in high school, when I joined the populace in swapping flannel for a cowboy hat. Tillis topped the charts in the ’90s and earned lots of awards and acclaims, making a name for herself on her own merits, not just as “Mel Tillis’ daughter.” These days, Tillis runs her own label in Nashville and does intimate, acoustic shows like the one at the Kentucky Center on Friday. Tillis is currently working with Jamie Lynn Spears, who is dabbling in country music. “She’s an awfully nice girl, and I can kinda relate to the challenges of coming out from underneath a huge shadow,” Tillis says. “She’s really good — I hope she gets a break. Her heart is in country music.” —Sara Havens

Ohio has always been a great source for rock ’n’ roll made by nice, polite people who are a little bit twisted, and Day Creeper is a worthy addition to that collection. The bi-gender trio from Columbus is young, hip and cute, the type who are young enough to be freshly inspired by ’90s indie rock and release new music on cassettes — though their danceable, jagged Modern Lovers-ish rock seemingly could have existed in any of the past five decades. Anyone looking for blues rock near the Yum! Center will have to look elsewhere tonight, as Day Creeper shares this bill with locals Gangly Youth, which features artist Skeleton Royal (formerly of the Kodan Armada) and slowcore folkies Tender Mercy in a battle of the well-educated bands. —Peter Berkowitz

Aside from the food, the best things Italy has given us since antiquity are clearly Commedia dell’Arte and the Spaghetti Western. Fans of both will find much to love in “The 7-Shot Symphony,” the award-winning original play by Minneapolis-based physical theater company Live Action Set, whose southeast tour stops at The Bard’s Town Theatre this weekend. Seven world myths collide against the backdrop of America’s Wild West in a show that’s been fondly described as “the love child of Quentin Tarantino and Cirque du Soleil.” Sheriff Odin keeps the peace in Deus County, where Orpheus plays piano at Hades’ outlaw hangout and a villain called The Wolf wreaks havoc. Call it frontier justice for the gods. The band Tree Party will accompany with original country music, promising alongside their mandolins and guitars “ol’-timey Western hoof sounds and chug-a-chugs.” —Erin Keane

Certainly life is uncertain. Individual choices affect infinite numbers of people. Insight and experience coincide to bring balance to the madness. The Rudyard Kipling celebrates this balance with the meeting of two playwrights — Rebecca Henderson and Heidi Saunders — who present their plays “Pump Works” and “Frog’s Milk” under the direction of Keith McGill. McGill seamlessly merged two individualistic productions into a comedic melting pot of music and theater. “Three people who meet over a septic tank fill more than the hole in the ground,” Saunders says. “Through comedy, poignant themes of loss, memory, laughter and hope are addressed.” Henderson and Saunders convey the truest of human emotions in their writing, and music director Frank Richmond reinforces their passion through music. —Allison Ray

I would argue that the combination of chili and beer is one of the best in the world. It certainly gives peanut butter and chocolate a run for its money. Wine and cheese? Eh, maybe. Lucky for cheer fans (get it? Chili + Beer = Cheer … or should it be billy?) Flanagan’s is hosting a Beer Chili Cook-off Saturday afternoon where more than 20 participants serve up their best chili/beer masterpiece. Flanny’s Beer Goddess Ashley Isaacs says some contestants are using the likes of Dogfish 90 Minute, Falls City and even Brooklyn Black Chocolate. Yum. A $5 cover will get you samples of all the chili and live music from Tim Morrow. There will also be Falls City specials all day long. See you there! —Sara Havens

Big city Louisville has had an awkward relationship with some of the most fun rural music in the region. Our closed bridge isn’t doing much to help further relations with truckers and their songs, so Johnny Berry has brought together players, pickers and kickers to help solve this crisis. Berry tells LEO, “We’ll be doing nothing but truck driving songs and instrumentals. The show is going to be monumental, with nothing but the top honky-tonk talent in the area.” George Jones collaborator Ron Gaddis, fiddlers Michael Cleveland and Jeff Guernsey, guitarists Steve Cooley and Gary Stilwell, bassist Chris Douglas, drummer Bryan Aylor and vocalists Kricket Atwood, J. Glenn, Scott Mertz and Sarah Teeple Swain fill out the ’tributers. DJ Woodrow on the Radio spins honky-tonk tunes before, and truckers who show their CDLs will get a discount. —Peter Berkowitz

‘The Animals in Us’

It has been said we’re all animals. That point is explored in a two-part exhibition at the Arts Council of Southern Indiana. “Animals represent much to us,” says executive director Julie Schweitzer. “They are used symbolically and metaphorically to help us explain and understand ourselves, the world we live in, and the values we live by.” Work by 16 Kentuckiana artists are featured, including Brian Somerville, Shawna Khalily and Ken Hayden, as well as nine Southern Indiana writers. The Saturday opening is from 4-8 p.m. The second part opens on Feb. 11 from 3-6 p.m. at the Resch Building, 138 E. Spring St. in New Albany. It’s in conjunction with “Passion for Pets,” a benefit supporting area no-kill organizations. —Jo Anne Triplett

‘Rudy Pozzatti: a life in print’

The Hite Art Institute is still waiting to exhale after receiving a gift of more than 400 prints from Indiana University professor emeritus (and former U of L Bingham Visiting Scholar) Rudy Pozzatti. As a way of saying “thank you” and to show visitors their new acquisitions, U of L has staged a three-part exhibition in his honor in the Schneider Hall Galleries. The Belknap Gallery features an overview of Pozzatti’s life-long passion for printmaking, especially etching and lithography. His recently completed “Twelve Labors of Hercules” is in Gallery X, while the Covi Gallery features collaborative woodcuts Pozzatti created with U of L professor emeritus Henry Chodkowski. A lecture by Pozzatti will be scheduled at a later date. —Jo Anne Triplett