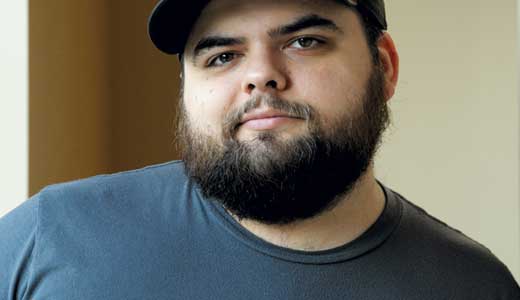 Through the years, Louisville’s AAA public radio station, WFPK, has attracted a large audience with their blend of thoughtful, semi-commercial singer-songwriters, alt-rockers, jazzbos and folkies. One target demo they had struggled with was the 16-34-year-olds group, but some recent, younger additions — music director and morning host Kyle Meredith, late night mixers OK Deejays and evening DJ Sean Cannon — have helped make the station more appealing to that generation.

For Cannon, whose experience has also included work in print news and music blogs, it’s obvious that he would utilize social media to help make the most of his program (heard Monday-Thursday nights on 91.9 FM and wfpk.org). “WFPK After Dark” not only plays some of the most interesting current music — a recent night featured songs by Dum Dum Girls, Kurt Vile, Deerhunter and Russian Circles, alongside usual suspects like Joan Osborne, Coldplay and the Dave Matthews Band — but recently expanded to add interview segments featuring hip folks like comedian Marc Maron, cast members of FX’s “The League,” the founder of taste-making music site Pitchfork, a co-owner of local eatery Please & Thank You, and bands like 400 Blows and Cave In.

“It’s been an interesting experience,” Cannon says. “The weirdest part, I think, is that a lot of those have just been set up through Twitter. Kyle and I were talking, and just sort of flippantly sent out a couple of tweets to (“League” co-stars) Paul Scheer and Mark Duplass, and they were both, automatically, ‘Yeah, I’ll do it tomorrow. Give me a number.’

“It started out in a very different form. When I initially got the job, I talked to (program director) Stacy (Owen) specifically about what I wanted to do … it morphed into an idea of doing an interview with someone every night, having them pick songs and doing DJ sets, every single night. So, from there, well, I’ve got to find people to interview. And it’s like, once this starts, I can’t just go, ‘OK, I’m not going to do it!’ six months in. I did the math, and it’s something like 160 people, because what we’re going to do is two months on, two weeks off. Two months of new stuff, two weeks of ‘best of,’ so it would be like a season or a series.”

Cannon was raised as a pop culture lover in Mayesville, Ky., which he immediately identifies as “the home of George Clooney,” as well as basketball stars. Two years at the Southern Baptist Theological Seminary didn’t agree with him, as he found it to be “a little too Southern, a little bit too Baptist.” Downtime at a job and friends met online led to work for the blog Buzzgrinder, which led to appearances on WFPK, which led to “After Dark.”

“I was working at Q-doba at the time, 30 hours a week … I was so uncomfortable on the air because I was so green, so I’d work 45 hours a week here to get up to speed … I would get maybe four hours of sleep a day. But I guess it worked out all right.”