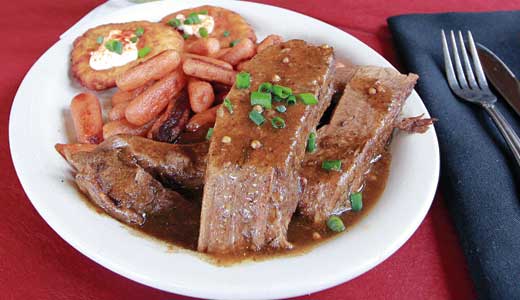 Remember those old commercials for Certs? “It’s a breath mint!” “It’s a candy mint!” “It’s two, two, two mints in one!” And then there was the goofy spoof from the gang at “Saturday Night Live”: “It’s a floor wax!” “It’s a dessert topping!”

I think the lesson most of us ultimately drew from this is that a product that tries to be two things in one ends up doing neither very well.

And Ramsi’s Café on the World, I regret to say, is kind of like that, too.

Interestingly enough, a Certs “mint” contains no mint oil whatsoever; its ads boast that it’s made with retsyn, a trademarked aromatic that sounds pretty cool until you learn that it’s a not-so-artisanal blend of copper gluconate, hydrogenated cottonseed oil and flavoring.

Ramsi’s is a little more authentic than that: Its owners — a couple of guys from Jerusalem who got their start as engineers — do pretty well when they fashion tzimmes, falafels and other goodies from the Levant. But take a look at Ramsi’s menu — an imposing document that fills both sides of an 11-by-17 laminated sheet — and you’ll find more than 100 dishes that span the globe, including some 30 entrees alone.

Ethnic flavors represented here run from Israel to Indonesia, China and Japan and on around through the Americas to Western Europe, with stops in Mexico and Cuba, Spain and Italy and Greece, not to mention vegetarian and vegan … well, let’s just say that if every ethnic cuisine represented here counted as a separate label — kind of like Certs — then Ramsi’s would be 24, 24, 24 restaurants in one.

So what’s wrong with that? This sounds like a formula I would love. I love to eat ethnic cuisine, and I love to cook ethnic cuisine. But I don’t assert that I can cook Thai or Punjabi like a native, and to be frank, it’s a bit of a reach if Ramsi’s makes a similar claim.

Now, let’s give Ramsi’s plenty of credit. This is a popular place. It has held down its space on Bardstown Road for a generation, and success has enabled it to remodel and grow into more than double its original space. Portions are good, service is friendly, it stays open late, the prices are reasonable, and I have never gone out of there leaving anything behind on my plate.

My problem is that Ramsi’s broad bill of fare builds high expectations that it doesn’t always reach. “Whoa! Indian/Japanese/Sichuan/Mexican food!” And so I order it, and it’s OK, but on the whole I really wish that I had just gone down the block to Kashmir or Sapporo or Wild Ginger or La Bamba Burritos Bigger Than Your Head and gotten myself the real thing.

The menu is divided by category (soups and salads, appetizers, entrees and such), with all the ethnic goodies mixed together like an international slumgullion, but you can count on finding something that will strike your fancy, and very little goes over $11, even with the relatively nominal price changes. There’s also full bar service, which may further add to Ramsi’s appeal, and it appears well chosen across the board, from short but decent beer and wine selections (the latter topping out at $30) to a substantive bourbon list — it’s a stop on the Urban Bourbon Trail.

We took a three-course trip through the United States, India and Southwest Asia with results varying from just OK to pretty good. A cup of “bean kingdom” soup ($3.75) reportedly carried 15 varieties of beans; I believe it, but didn’t try to count them. It was warming and hearty, with a rather heavy hand on the herbs.

A pair of Punjabi somosa ($6), savory Indian pastries shaped like oversize Hershey’s Kisses, were crisp pastry stuffed with curry-spiced mashed potatoes and peas; they came with an odd version of tamarind sauce that looked flour-thickened and shy on flavor. The hibachi salad ($7.25) drew a lot more praise: A generous portion of chopped lettuce was tossed with shredded carrots and radishes, blue cheese and a length of tender heart of palm that had been briefly warmed on the grill. A Japanese-style ginger dressing made an unexpected but applause-worthy finishing touch.

A very generous order of tender beef brisket ($14.50) was estimable; accompanying orders of carrot tzimmes, a Jewish side dish featuring carrots (regrettably, bagged “baby” carrots) cooked until soft and coated with honey; and an odd sort of latkes (potato pancakes) that appeared to be mashed-potato patties cloaked with a bound breading and deep-fried.

Navratan korma ($11) was one of those Indian-style dishes that passed muster, barely, but made me long for real Indian food. A thick, gently spicy stew of sweet potatoes, garbanzos, green peas and basmati rice, it was as orange as John Boehner’s tan and unfortunately looked a bit like Alpo. It tasted OK, but a few bites was plenty, and we took the rest home.

We went back to Southwest Asia for dessert, a simple but succulent platter of six madjool dates stuffed with dabs of mild goat cheese ($7.85), a delicious and relatively light way to end a substantial meal. Dinner for two came to $53.37 before tip.