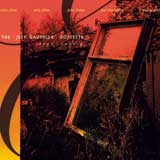 Sometimes the albums you listen to with no expectations are the most satisfying — though, in this case, it doesn’t hurt when you flip it over and see that Nels and Alex Cline are in the band. The Wilco guitarist and his drummer brother have played with violinist Jeff Gauthier off and on for nearly two decades and, on Open Source, make for one of the more exciting jazz releases of the year. The album starts with the Bitches Brew-infused hellfire of “40 Lashes (With Mascara),” allowing for wicked interplay between Gauthier (on electric violin) and new bandmate, trumpeter John Fumo, and fierce punctuation from the brothers Cline. So much jazz violin is either schmaltz or attention-starved overplaying, but Gauthier plays it without asterisk or smirk. Much of Open Source is pretty intense, so when it stops to catch its breath, as it does on the beautiful “Things Past,” you concentrate all the more. This Goatette has no single star, no one rushes forward for a spotlight. This is the effort of a group bereft of ego, and our ears celebrate.