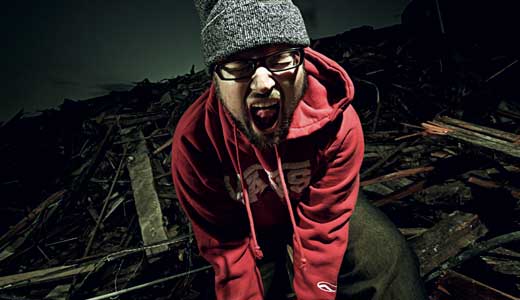 Little Heart Records rose from a cage match that label founder Bryan Puckett had with his own mortality. “I am not the healthiest human being,” he tells LEO over dinner at the Oriental House. “Most of my doctors have told me I’ll be lucky to push 40; I’m 31. Being told I’m lucky to push 40, I’ve pretty much decided I’m not having kids — this is what I’m doing instead. Other people make babies, I make records. This has become my singular focus. I talk about this label the way people talk about their kids. I unfold my wallet, and there’s a wad of album covers for records I’ve put out."

In a conversation about the label’s pending sixth anniversary, looking at his wallet, I ask abo ut the first album he ever put out. “Yeah, I remember it … but I don’t wanna talk about it.”

“So there’s no nostalgia in that release at all?,” I ask, pushing a little further, our plates of Chinese food cooling as we talk. “Umm … no, not really,” Puckett continues. “When I released the rights back to the band, it just felt like another thing to do on my checklist that day. I didn’t even think about it, really.”

Puckett — born with a rare heart condition that inspired the name of his label — runs a small operation, mostly out of his condo in St. Matthews. On most days, his home looks more like a cross between a hobbit-hole and a record library. Boxes of vinyl, CDs and digital download cards are stacked everywhere with seemingly little method to the madness, but somehow, among the clutter, nothing ever gets lost and everything gets out.

For now, his focus is on the label’s ambitious sixth anniversary celebration. “The first night will be all of our acoustic acts. On the second night, the early show is all of our pop-punk and power-pop bands. Second night, late show, is going to be our hardcore bands. And night three is what I’m calling party night — we’ll have R&B, hip-hop and just some all-around party bands.”

A sprawling event culminating in four shows with 17 bands — including Skyscraper Stereo, Late Ones, The Codas, Common Collective and the reunited Nixon — over the course of three days, it’s an idea that sprang from lessons learned in previous celebrations. “Last year, we tried to put as much on one show as possible — we had nine acts in four-and-a-half hours. There were a lot of people there, but some of them just looked like, ‘Oh my God, this is too much.’ So I wanted to break it up some.”