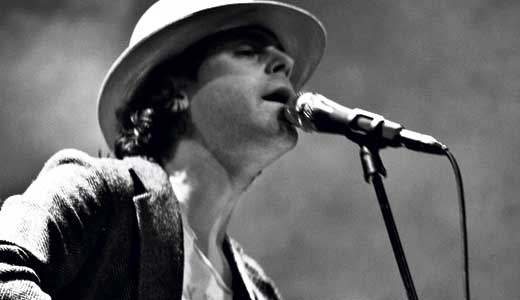 It says something about the current state of rock ’n’ roll that one of its most passionate and urgent performers needs to call LEO back after he finishes running errands with his grandmother in Delray Beach, Fla. It says something, too, about the character of Langhorne Slim — known to his family as Sean Scolnick — and how he was raised.

“My grandparents had a major impact on my brother and me growing up, and they’ve always been 100 percent supportive and really into it, which is pretty awesome,” says the 31-year-old folk and punk-inspired singer/songwriter/guitarist from Langhorne, Penn.

“I think it was so clear, growing up, that (having a typical career) was not a path I was going to be able to take, even if I wanted to — and that if anything was going to keep me out of trouble, that would be art or performing or music.

“They saw how happy it made me, and, as soon as I started gaining certain accomplishments or making a living at it, it would almost have been crazy to talk me out of doing something that made me happy, that I was also starting to make a living at.”

Tours with the Avett Brothers, Lucero, Josh Ritter and many others, plus appearances at Bonnaroo, Lollapalooza and on David Letterman’s show have helped them understand the life of the troubadour.

“I think that they didn’t understand, like the first time we went to Italy: ‘There’s somebody in Italy that you’ve never met, who contacted you and now you’re gonna go there for a month and travel around Europe?’” Scolnick laughs. “I’m like, ‘This is what I’ve always wanted, this is the way this life goes.’ So now they get it. They’re still my Jewish mother and grandmother, but I think now they realize they’re still going to worry a little bit, but I’m not going and getting kidnapped; I’m actually going because people have booked shows, and we’re gonna go play them.”

His family is among the first to hear his new records, though Grandma’s sneak preview of the upcoming Langhorne Slim album, The Way We Move, due in May, has been delayed.

“Usually, when we’re done recording, I would have a CD of rough mixes and play it for my family. This time, I just had it on my iPhone, and I don’t have an adaptor — so she thinks I’m holding out on her.”

The live shows are where the band truly excels — usually. Scolnick discusses the relationship between concerts and blind dates. “That’s what shows are, essentially. They book the show and then you show up and meet a bunch of strangers,” he laughs. “That’s the beauty of this life, man, it’s what I love … I went on one blind date when I was a lot younger, and it was fucking terrible. There are similarities, but I wouldn’t equate it. I mean, I play shows that are terrible, too, but the vast majority would be like a really, really great blind date.”

Read an extended interview at bluecat.leoweekly.com.

with The Features and Rayland Baxter