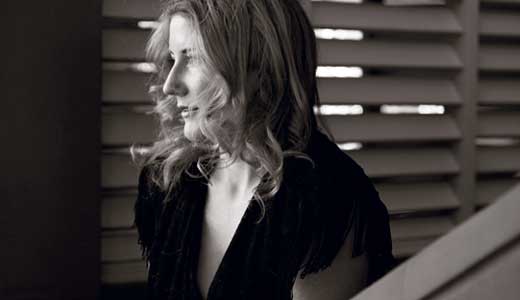 Both releases have a layered production similar in many ways to where Bon Iver has been headed. The new set is some distance from Edwards’ previous releases — not only in sound, but also in songwriting. Edwards is still brave and honest, self-effacing and unafraid of showing real humor along with beautifully controlled sharp edges. But the song subjects and lyrics this time around are less direct in evoking the environment of many of Edwards’ songs — a northern rustic hardscrabble, capable of turning on a hockey reference or turning into darkly poignant noir vignettes. The new songs more often center on emotional landscapes — whether it’s about love being promised, forsaken, won, lost or maintained.

Edwards spoke with LEO as she prepared for the tour that will bring her back here. Vernon is now her boyfriend and, as she heads off on her own band’s tour, she’s aware that his standing in music today will cast at least a little of its own shadow on her career, at least for now. As Edwards says, “It’s great that people are going to listen to my record for the first time because his name is attached to it — but (the relationship) certainly wasn’t the reason we work together.”

Kathleen Edwards: It was the 100th anniversary of the establishment of Parks Canada, so they did this project where they took filmmakers and paired them up with musicians, and each went to a different part of the country … I wrote this song while I was at the National Park called Wapusk. Right after that trip, I went to Wisconsin for the first time to see Justin Vernon’s studio. We’d sort of plotted in the spring to maybe work for a few days and see how it went. It just so happened that I had written that song and it was fresh in my mind, and so that was the song that we worked on. It was a really definitive moment at the end of August when we started working on this track and it’s coming together — that was the first time we’d worked together and it went very well.

LEO: The sound of this fourth record is a significantly different listening experience from its predecessors. When you heard playbacks, did you think, “I wish I’d been able to record this way previously?”

KE: It’s natural … the development of your ideas is really rewarding to hear back, and to feel like you’re growing as a person and as a musician. I can’t look back and say, “Hey, I wish my records had been more like this,” because all my records were made exactly the way I wanted to make them. But I definitely started making this record with a goal in mind: to venture into uncharted territory for me and to show a broader range of my musical aesthetic. I think I was able to do that more this time because of some of the circumstances — and certainly working with Justin.

His contribution is so significant as co-producer. I would be able to articulate only so far sometimes what I wanted to do. Then you just have to go and try, and sometimes those ideas don’t work and you scrap ’em and you try again and try again. Justin’s sound is definitely one of lots of little details that create sort of a wall of sound. But it was definitely in keeping with what I wanted. As for the final product, I don’t feel it doesn’t sound like me — it does sound like me a lot, and it’s exactly what I wanted. Something that had a broader spectrum of ideas musically to draw on and not just be boxed into this Americana thing that was just, “Well, it’s kinda rootsy, it’s kinda folkie.”