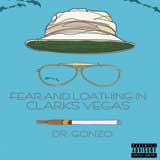 The producer of Scanners has put in his bid for the “Producer Album” and succeeds in achieving something more The Chronic than Aftermath Presents. Dr. Gonzo worked his contacts list to feature just about every rapper he could name in the city. That he’s been as involved as he has in the inclusive nature of Louisville’s “All Crews United” mentality means he can cross over to nearly any group or collective to draw a feature. Fear and Loathing in Clarksvegas, borrowing a Hunter-inspired moniker and concept from his cross-river home, is a jam-packed hour with more than a dozen emcees, all trying to outdo each other over some of the most solid production you’ll hear all year. Of course, the tracks featuring his partner in rhyme, Nacirema, are among the highest highs; they just have a natural chemistry together that should ensure a long collaboration. Their “Michael Douglas” is a beautiful piano-driven piece that has gotten repeated plays. Goodbar and his effortless flow prop up two other excellent offerings, while his Skyscraper cohort, Chuck Deuce, makes no friends via the scathing and hilarious “The Business.”