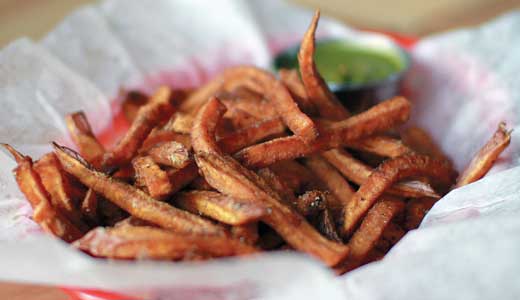 Back in the day, when I was young and stupid, I would often make the long drive down California’s agricultural Central Valley, burning up the Golden State Highway to visit a girlfriend at UCLA.

When I hit the dusty town of Bakersfield, surrounded by oil rigs and potato fields, I knew I was within 100 miles and a couple of fast-driving hours over the Santa Monica Hills to my destination. Sometimes I would reward myself with a pit stop and a cold beer at some dark and noisy honky-tonk, where the dominant sound was invariably loud country music.

Little did I know that many years later, a dark and noisy Bakersfield-style honky-tonk would emerge as the hottest new hipster destination back in my hometown of Louisville.

Say hello to The Silver Dollar, which now proudly resides in the space that long housed hook-and-ladders in the historic Albert A. Stoll firehouse in Clifton.

The red brick firehouse (Hook and Ladder Co. No. 3), built in 1890 and named after a city school board president of that year, is listed on the National Register of Historic Places, described as “an architectural gem in the Gothic Revival style.” New owners Larry Rice, who came from 732 Social, Michael Rubel, who has tended fancy bars like Chicago’s Violet Hour and Big Star, and local attorney Shawn Cantley have done an admirable job of renovating and re-purposing it as, well, a honky-tonk.

The 42-foot pinewood bar appears to seat about 30 tipplers in elbow-to-elbow comfort; the bar and the sturdy booths along the other side of the former fire-engine room are said to be made with wood from the Old Crow Distillery near Frankfort. They’ve respected the feel of the old firehouse while importing a distinct impression of a Bakersfield farmer bar — an impression not diminished by the high-decibel sound of Buck Owens, Merle Haggard and their rockabilly peers that blasts out almost continuously.

Did I mention it is loud in there? In fairness, we unexpectedly shared space with a local firm’s Christmas party, which got insanely loud, but was kind of fun until our ears started to ring. The decibel count remains fairly high here even on a more normal evening, though. It’s also dark — dark enough that I had to squint to make out the menu.

Not that I’m complaining. A Bakersfield-style honky-tonk is supposed to be dark and noisy. That’s part of the shtick. In an authentic Bakersfield farmer bar, you’ll also see a lot of drunks, a lot of cussing and about as many fights as you get during a hockey game; I don’t expect The Silver Dollar will go there.

Chef Jonathan Schwartz and sous chef Dave Hawkins have put together a simple bill of fare that respects the Bakersfield tradition with a lively mix of blue-collar Okie dishes with the Chicano flavors of the Central Valley farm country, and throws in more familiar tastes of Kentucky and the upland South. It’s well-executed tavern fare, and there’s no need to ask for more.

Speaking of adult beverages, the bar list includes a serious collection of about 50 bourbons and a good number of tequilas (including $3-a-shot daily specials) and a full page of creative bourbon or tequila cocktails. Scotch? Don’t even ask. The beer list offers seven drafts and about 30 bottled beers, including a good selection of national craft beers and a limited selection of locals. Wine is limited to “red” or “white.”

Dinners range up to $32 for an 18-ounce bone-in strip steak, $24 for blue-corn-crusted snapper, but most entrees — served with sweet, crumbly-cake corn bread — are priced in the teens, with sandwiches, small plates and sides generally under $10.

I made a rare venture into the world of cocktails with a Woolworth Manhattan ($8), a sweet, smooth mix of Wild Turkey 101 with Italian Cynar artichoke liqueur and a shot of Angostura bitters. Our pal Sarah gave two thumbs up to a bourbon shot with ice on the side, and Mary pulled a Lone Star Texas beer ($3) from a longneck bottle.

The spice-rubbed, hickory-smoked beef brisket ($15) was exceptional, a work of the smoker’s art, but we’d have been happier with the sweet-hot sauce on the side so we could doctor it up the way we wanted. A side of collards ($3) was forgettable. The chicken-fried steak ($14) was Okie-diner perfect, as were the roughly “smashed” potatoes. The molletes ($8), a hot Chicano sandwich made with melted chihuahua cheese, black beans with spicy pico de gallo on a toasted bollito (torta) bun, was first-rate, as were the house-made potato chips.

Our share of dinner, including a cocktail and cheap Lone Star, came to a very reasonable $61.