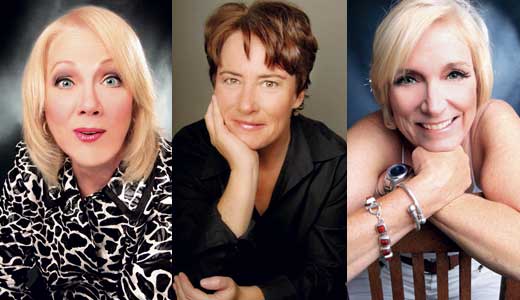 Poppy Champlin has been trucking along the stand-up circuit for more than 30 years and has worked with everyone from Rosie O’Donnell and Bill Maher to Bill Hicks and Denis Leary. She’s appeared on numerous TV shows and specials, most recently Showtime’s “Pride: The Gay and Lesbian Comedy Slam.” Creator of the “Queer Queens of Qomedy” tour, Champlin will be joined with comedians Vickie Shaw and Barb Neligan as the tour makes a stop at the Improv Sunday afternoon.

LEO: What made you decide to put together “Queer Queens of Qomedy”?
Poppy Champlin: You know, they say necessity is the mother of invention. So, it was necessary. I wanted to sell out big theaters, and in the LGBT community, there are certain names that can do that, but not that many. I went to a theater and asked them if I could sell it out, and he didn’t seem to think I could because I didn’t have a big enough name. And I was like, “How about if I bring two others that don’t have big enough names? And then there will be three of us, and we’re all as funny if not funnier … we just don’t have that big name yet.” So we did it, and it’s been going for six years now.

LEO: Some people are afraid of the word “queer” — are you OK with it?
PC: I like alliteration, really. I almost became an English major. I do want to let people know off the bat what we’re about so they’re not stepping into anything they don’t know about. Vickie Shaw, who is doing the tour, she’s a mother, she’s a grandmother, and she says she just happens to be gay. The material isn’t all queer. It definitely covers every color of the rainbow.

LEO: As a gay girl myself, why is it that we’re just more funny than straights?
PC: (Laughs) Well, minorities tend to be funnier. You’ve had to do a little more struggling. And so, therefore, you definitely have to see the funny side of things to keep yourself happy.

LEO: What’s a typical Poppy show like?
PC: I like to call it spin art — no two are ever alike. I do enjoy the audience’s participation, so I will banter with the crowd. I throw in some songs, song parodies. I do bird calls. Impressions. Topical jokes as well as jokes I’ve been doing for a long time — like the one about my name. I’m basically all over the place.

LEO: You did some time with Second City in Chicago. What was that like?
PC: Unfortunately, I thought I was coming to Chicago to audition to be on the main stage. And then when I saw my name on the board as having passed, I thought, “Oh my god, I’m going to be on the main stage!” And everyone was like, “No, you passed your audition to take a class.” My career has kinda been like that.

LEO: Did you have any famous classmates?
PC: Classmates, no. But when I was going through the school, Chris Farley was on the main stage, Mike Myers, Bonnie Hunt … there were some good ones.

LEO: You’ve opened for Rosie O’Donnell! Got any dirt on her?
PC: I opened for her in Chicago at the Improv. She was really nice and asked me if I wanted to help write for her. I’m such an idiot — you know, I had a girlfriend at the time and we were going to Jamaica the next day — and I put my girlfriend over my career. I do that all the time! I hate that about myself. I was just like, “I’d like to have a career writing for you, but I’m going to Jamaica with my girlfriend tomorrow.” And then the girl who did help write for her ended up going on tour with her.

I did end up getting on her TV show when she was on VH1’s “Standup Spotlight.” And later I performed on one of her cruises and was in that HBO documentary they did on it — I was in it for like three minutes.