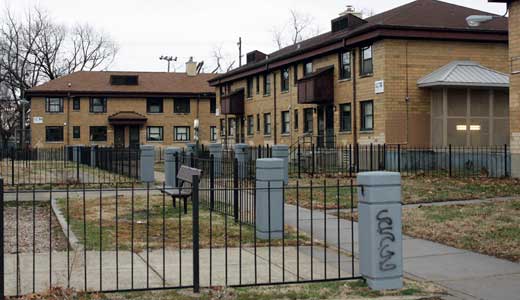 Armstrong can’t find her space heater or Weasel’s bed. She likes that her new place is clean, quiet, updated, but hates its lack of storage space.

After more than 50 years living at Sheppard Square, a public housing project in Smoketown, Armstrong, who gets around mostly by wheelchair, was moved to another complex in west Louisville, Beecher Terrace, last month.

Roughly 270 households were forced to relocate as part of the HOPE VI renovation of Sheppard Square — a public-private investment of $167 million to reinvent the complex into a mixed-income neighborhood. In May, the U.S. Department of Housing and Urban Development (HUD) awarded a $22 million federal grant to act as seed money for the demolition and reconstruction.

Sheppard Square, like other housing projects built in the post-Depression era, was conceived as a stepping-stone for low-income working families. But economic and social policies of the last half-century turned these projects into more of a dead end, feeding poverty’s complex cycle.

Sheppard Square will be the Louisville Metro Housing Authority’s third and last HOPE VI renovation. The 20-year-old program established to eradicate distressed public housing and break up clusters of poverty is ending.

Residents have cleared out of Sheppard Square’s 16-acre site noticeably fast. About four months after relocation started, only 20 families remain.

“It’s been quicker than we anticipated,” says Lawrence Wilbon, who oversees youth programs at the neighboring Presbyterian Community Center.

He credits the Metro Housing Authority with a smooth relocation plan. Still, even he’s surprised at how the community center’s after-school programs have gone from hosting up to 100 children to just a couple dozen. Wilbon says the center is now reconnecting with kids in their new homes to maintain those relationships.

Tim Barry, executive director of the Metro Housing Authority, says the rapid dispersal of residents is likely due to the fact that revitalization plans for Smoketown and Sheppard Square have been around for a while. People were ready to go.

“I think the discussions abut Sheppard Square and what might happen someday have been going on for at least a decade, if not longer,” Barry says.

Another reason may be that as buildings emptied out, trouble surfaced. Ruth Armstrong recalls thieves breaking into her building to steal a refrigerator. Copper has been yanked from pipes. Shattered windows now dot the complex.

Katie Bowers, a 33-year-old mother of three, says in her eight years at Sheppard Square, the last few weeks were certainly the eeriest.

“I’m not going to lie. I’ve been there so long, I’ve never been scared to walk through there at night,” she says. “But it had me a little spooked walking through there.”

(Of course, any neighborhood that’s swiftly vacated would likely experience the same issues.)

What’s less certain, according to housing justice advocates and literature written on the federal initiative, is whether these revitalization efforts hold long-term benefits for the people (mostly single, African-American moms) who are dispersed and, more often than not, do not return post-renovation, either due to stringent re-entry criteria or relocation fatigue.

On a recent Tuesday night, a U-Haul pulls out of Sheppard Square just as a monthly meeting related to the HOPE VI project gets under way at nearby Meyzeek Middle School.

Tim Barry tells the group that most residents, about 140, have opted for Section 8 rental assistance vouchers that allow them to go wherever landlords accept vouchers. Fewer than 30 have chosen to move to other public housing complexes. Fifty-three have opted for the Metro Housing Authority’s individual public housing units scattered throughout the county.

A list of relocations by ZIP code shows most residents have moved to neighborhoods primarily south and west of downtown, with a significant number in west Louisville. East End relocation is minimal.

That’s especially true with scattered site housing, he says, “Because that’s something we can control.” He’s referring to how Metro Housing purchases individual public housing units in all pockets of Jefferson County once a complex is torn down.

“But with housing choice, it is a choice,” he adds. “I think it’s natural for anyone to kind of migrate to areas where they’re familiar, where they might have grown up, they have family connections, or church. And so that’s not unusual. It’s slow going trying to change some of these housing patterns.”

Angel Jin is one of about a dozen former Sheppard Square residents who found a new place to live on her own. Jin thought about scattered site housing, but says the apartments offered to her by the Metro Housing Authority were too far — way outside the Watterson Expressway.

“I don’t have a car, and I have a lot of doctor’s appointments,” says Jin, who struggles with various health problems.

Through a family friend, she found a house she’s thrilled with. It’s in a quiet neighborhood near Algonquin Parkway with an easily accessible bus line, and utilities are included, a major selling point.

Cathy Hinko, executive director of the Metropolitan Housing Coalition, believes utility costs could be a major problem for former Sheppard Square residents used to being on a central meter where energy costs are folded into their total rent payment.

Relocated families in scattered site and Section 8 units will now be on individual meters. While a subsidy will help pay for bills, Hinko anticipates some unwanted surprises, especially with LG&E raising rates and the utility allowance only going so far.

“People are facing, for the first time, a real uncertainty about what monthly costs for shelter will be,” she says.

Katie Bowers just moved into a house in the West End with the help of a Section 8 housing voucher. She’s acutely aware that she may get hit with a large bill despite the utility stipend.

“It’s a change as far as budgeting and things,” she says.

Bowers is unemployed but actively looking for work. She says invaluable support has come from her case manager, assigned to her as part of the HOPE VI relocation. She’s encouraged Bowers to enroll in job training and family self-sufficiency programs. Her case manager is also investigating scholarships for the culinary program at Sullivan University.

“They’re a big help. You just have to utilize it when they’re helping you. And a lot of people don’t want to do that,” Bowers says. “They think when you’re moving out, ‘OK, fine, I don’t want to deal with you anymore.’”

Bowers is one of 72 people who’ve signed up for some kind of support services. That’s less than 30 percent of all Sheppard Square residents, even lower than the estimated 42 percent that took advantage of case management programs during the Clarksdale renovation.

A partnership with Kentuckiana Works to provide job training for up to 161 Sheppard Square residents has so far only recruited one person. (In its grant application to HUD, it was estimated half of Sheppard Square residents 18 years and older hold a high school diploma or GED.) But Barry says all of these programs will be available to residents over the course of the grant, for the next five years.

“We hope numbers go up. As people settle in, they can think about services we offer,” Barry says.

HUD requires an evaluation of Sheppard Square’s relocation efforts. Bids for the study — which will weigh health, economic and social outcomes — should go out soon.

For now, as the last few families pack up their apartments, several former residents tell LEO that when the wrecking ball hits the bricks, they want to watch, saying they’re happy to have escaped a place burdened by drug activity and crime.

Meanwhile, 84-year-old Ruth Armstrong feels far more conflicted. When asked if she wants to witness demolition, she thinks for a moment.

“I might go,” she pauses, gently patting Weasel. “Just to say goodbye to my good old home.”