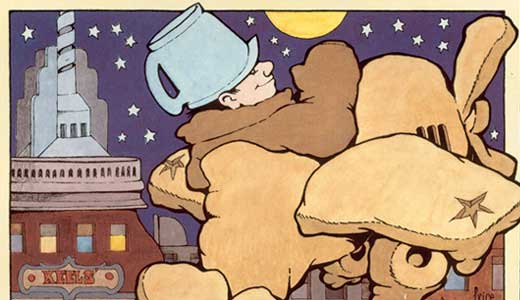 A boy in an airplane made of dough, a mischievous king of the wild things — these figures are familiar characters in childhood libraries around the world, sprung from the imagination of Maurice Sendak and into the hearts of millions. “Where the Wild Things Are” is an iconic work of children’s literature, winning the Caldecott Medal and listed among the top 10 children’s books of all time by the Children’s Books Guide. It has been adapted into a play, an opera and multiple films, and has sold more than 19 million copies worldwide since its publication in 1963.

Sendak’s works are beloved, forming an integral part of the children’s literature canon. However, few people are aware of the deeper historical and cultural themes explored in his books, from the plight of the Jewish Diaspora to the problematic status of immigrant children trapped between the Old and New Worlds.

The Louisville Free Public Library’s latest exhibit, “In a Nutshell: The Worlds of Maurice Sendak,” explores the work, history and legacy of the author and illustrator, probing the darker themes that resonate throughout his deceptively simple stories. “Sendak is an icon in children’s literature, (but) this exhibit deals with lots of adult topics of immigration, cultural and religious identity, and discrimination, (which) are important historically, but are also extremely relevant to a more diverse America today,” says curator Paul Burns.

The exhibit traces Sendak’s life from his Polish heritage and Brooklyn roots to international success. Sendak’s childhood had a huge influence on his work. He said of his upbringing, “Living in Brooklyn is like living on Planet Y.” Like many immigrant children, he felt torn between his roots and American childhood, never feeling completely at home in either world.

Sendak’s books were the first to showcase the immigrant youth of New York and other urban centers. His cheeky, dark-haired heroes broke with the traditions of Dick, Jane and the other well-behaved, Aryan children who populated early children’s books. “Sendak was a trailblazer in children’s literature,” Burns says. “Prior to his early work, kids’ books generally told fluffy stories with idyllic little children with rosy cheeks. Sendak’s children resembled the kids he grew up with in Brooklyn — scrappy, with strong personalities and big imaginations. They talked back to their parents, got into mischief, and were more real. That had not been done before.” Sendak’s innovations paved the way for the likes of Ramona Quimby, Fudge, Junie B. Jones and other beloved characters, changing the face of children’s and young adult literature.

In addition to breaking stereotypes and expanding the realm of stories available to children’s book authors, Sendak used his books to delve into darker issues, from current events to the plight of the Jewish Diaspora. The Holocaust played a particularly large role in Sendak’s work. As a child, he pored over black-and-white family photos, fascinated by the smiling faces and wispy buns of an extended family slaughtered by the Nazis. “To go through the family album and to see what I thought were these beautiful people who were dead, was unbelievable,” he says. “All of that was a re-creation of a world I never knew.”

Sendak’s Jewish heritage was hugely influential to his work. Hidden within the whimsical adventures and gleeful romping of “Where the Wild Things Are” and “In the Night Kitchen” are allusions to the Old and New World and the legacy of the Holocaust, as well as references to current events and cultural history. The kidnapping of the Lindbergh baby, the stylistic conventions of Renaissance art, even Mozart — a wealth of cultural knowledge and a keen sense of the contemporary world lie within Sendak’s lush jungles full of ragtag children.

In an iconic scene from “You’ve Got Mail,” an effusive Meg Ryan says, “When you read a book as a child, it becomes a part of your identity in a way that no other reading in your whole life does.” Works like “Where the Wild Things Are” have become a part of our cultural identity, touching the lives of children the world over for nearly 50 years. “Everyone knows ‘Where the Wild Things Are,’” Burns reiterates, “(but) they are unaware of the history behind those stories. I hope the exhibit opens a window of understanding into how our different lives and backgrounds shape our perceptions of the world.”

In conjunction with “In a Nutshell,” there will be a Stage One presentation of “A Wild, Wild Rumpus” on Jan. 28 at 11 a.m., and the lecture “Jewish Ritual Objects: Religion and Art” by U of L history professor Lee Shai Weissbach on Feb. 16 at 7 p.m.