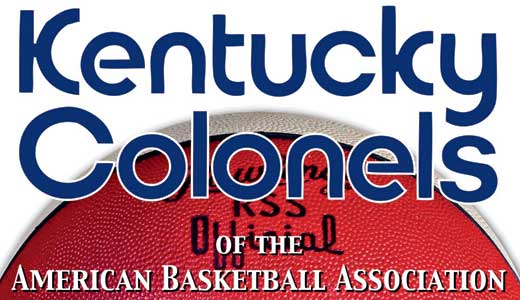 ‘Kentucky Colonels of the American Basketball Association: The Real Story of a Team Left Behind’
By Gary West and Lloyd Gardner. Acclaim Press; 352 pgs., $29.95.

It’s been 35 years since Louie Dampier scored the last of his record 13,726 points for the Kentucky Colonels. A long time since Artis Gilmore skied above the Freedom Hall rims, since Darel Carrier sank his last last-second shot, and owner John Y. Brown broke up a championship team by trading Dan Issel to a new American Basketball Association franchise that didn’t have a nickel in real money and never played a game. (Brown did make the deal right by forcing the phonus-balonus Baltimore Claws to send Issel on to Denver, which would soon move on the rival National Basketball Association.)

Seems like only yesterday for those who saw those stars. And a long time ago to those who didn’t. But the Kentucky Colonels remain in our collective memory as a professional basketball team that once did Louisville proud.

The new book “Kentucky Colonels of the American Basketball Association,” by Gary West and Lloyd Gardner, brings the Colonels’ trials and triumphs bouncing back in stories as colorful as the ABA’s red, white and blue basketballs. The book jacket carries the subtitle “The Story of a Team Left Behind,” though the whole thing might have been snappier with the name Gardner originally suggested to West: “If They Only Knew.”

Gardner, who was the team’s trainer, and later a high school championship coach at Louisville Fairdale High School, was an inside part of the Colonels nine-year (1967-76) run in the ABA. West, a Bowling Green, Ky., writer, rounded up the cast of Colonels’ characters for first-person accounts that recreate the saga of a small city team in an upstart pro league with big-time ambitions.

The ABA didn’t mind doing things differently, pioneering the three-point shot and super-charging its rosters with NBA-barred stars like Connie Hawkins and Roger Brown, and flakes like New Jersey’s Art Heyman. The league shook off franchise closings and missed payrolls, and kept on going for nine pretty glorious seasons — with four teams (San Antonio, New York, Denver and Indiana) ending up in the NBA, and some left to history, including Kentucky.

The Colonels might never have been if local basketball zealots hadn’t found Joe and Mamie Gregory to put up the cash to buy an ABA franchise and fund its operation. Joe, who was from Cloverport, Ky., made no bones that his biggest job was to keep track of Mamie’s money and help her spend it. Mamie was the daughter of the Ferrari franchise holder for North America. She and Joe raised show dogs, including a little champ named Ziggy, who became the Colonel’s mascot, sitting in its own chair at courtside.

Mamie’s favorite player, we learn, was Darel Carrier, the former Western Kentucky All-American who, with Dampier, turned the leagues’ new three-point shot into one of the great weapons of basketball. Carrier even lived on the Gregorys’ showcase spread in Shelby County. “I was a farm boy from Bristow (Ky.),” says Carrier. “And it suited me just fine to run their part of the farm during the off-season. I did whatever they needed, and they took care of me. I enjoyed being around their million dollar dogs and million dollar horses.” Carrier says he had what amounted to a no-cut contract with the Gregorys. “They pretty much took care of everything. It even included a gold Pontiac Grand Prix from Swope Pontiac.”

Hardin McLane, who had been a top high school coach at Elizabethtown Catholic, was hired into the Colonels front office and promptly presented with a Ford Fairlane company car. Mamie also gave McLane a pedigreed pup named Calvin Murphy, after the NBA guard who hit a record 78 consecutive free throws. But, McLane says, Mamie’s real talent lay with cars. “(One day) she drove a pick-up truck down to V.V. Cooke Chevy,” McLane recalls. “She saw a Corvette she liked and pulled over and bought it on the spot. She wrote a check for it right then. The salesman couldn’t believe it, and of course, he called the bank. The bank told the salesman he could take a check on her up to $52 million.”

The scope of the book is broadened by its storytellers. Western Kentucky star Jim McDaniels, who played only briefly with the Colonels after a brilliant pro start with the Carolina Cougars, recounts his secret pro signing and dealings with unscrupulous agents that left him and his college’s Final Four glory tainted forever. “You know,” says McDaniels, “I’ve often wondered about the girl at Western who put me in contact with (agent) Norman Blass. I’ve concluded that she might have been a plant, there for one semester or maybe not even a student, with a purpose to put me in contact with this guy. That’s how serious it was with the ABA and NBA back then.”

Gary West and Lloyd Gardner will be doing a reading and signing on Saturday, Jan. 21 at 4 p.m. at Carmichael’s Bookstore (2720 Frankfort Ave.).