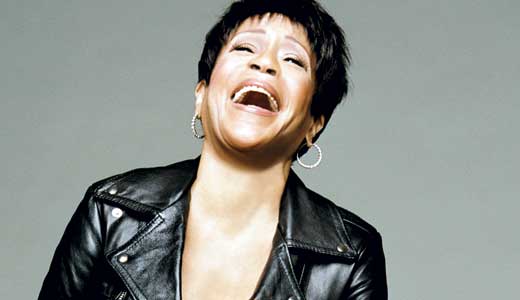 As Bettye LaVette approaches the 50th anniversary of her music career, she’s taking a break from album and book releases and returning to Louisville.

LaVette’s career began producing R&B hits as a teenager in Detroit in 1962. She crossed over into other styles through the years, working in disco, rock and even on Broadway. She’s always remained in demand for her interpretive choices and her voice, which has gruff qualities that she uses in thrilling ways without straining for effect.

Despite some hard years and harsh treatment, LaVette can laugh about her career path. She draws out the laughter in those around her, too, shooting straight, with no need to sentimentalize the bumpy road. As she spoke with LEO, she referred to the remarkable and sustained comeback of the last nine years as “this coming up out of the crypt.”

The new millennium has brought long-awaited deliverance and a much larger audience. The Blues Express label released her acclaimed comeback, A Woman Like Me, in 2003, and she subsequently signed to Anti-, a mostly alt-rock label that had also helped revive Solomon Burke’s career. Paired with respectful but challenging producers and musicians, including Joe Henry and Patterson Hood, LaVette has since produced three masterful CDs.

As for her next full-length, LaVette says, “The other three albums (for Anti-) have had a concept. The first one was all songs written by women. The next one was the thing with the Drive-By Truckers — it was supposed to be ‘me and youth,’” she laughs. “And the last one was the British rock songs. This new one isn’t conceptual; it’s more of ‘a sound’ — a different sound for me.

“They have my voice and they have the basic arrangement. And now the producer, Craig Street, will try and interpret the rest of my ideas. Mostly what I do is the vocals thing, but I can come up with ideas for what I want everything else to do and sound like — and he’s the master at that part. He should be working through the end of March, and we’re expecting to have it released by end of summer or first of fall.”

Around the same time as the album release, LaVette’s memoirs, co-written with David Ritz, will be released.

Her live reputation led to a show-stealing Kennedy Center Honors performance in 2008, where her rendition of The Who’s “Love, Reign O’er Me” made composer Pete Townshend cry. That performance inspired the “British rock songs” album, Interpretations, a bold move that may be the most unexpected turn in a career that has had many. LaVette got a major opportunity to hear how her version of Led Zeppelin’s “All My Love” went over last year as she toured as an opener for Robert Plant.

LaVette holds dear the opinions of devoted fans to the “Northern Soul” sound, a subgenre that comes as close as any attempting to label the heart of her ever-expanding sound. But she’ll call them out, too, as she quips, “They’ve supported me all these years, and so they feel that I should continue to record (her 1965 soul classic) ‘Let Me Down Easy’ for the rest of my life.”

The woman whom Esquire has dubbed “The sexiest female vocalist alive” says fans at the Clifton Center will get “something from every period, from the ’60s, ’70s, ’80s … I was fortunate enough to have a record at least every 10 years. It was a little easier when nobody knew anything I did and they were pretty much like, ‘What’s she going to sing?’ But now, I’ve got to cover all the bases.”

LaVette also tells LEO about her year of living in Louisville (“did not get one gig the entire year I was there, but I had a great time”). When asked if her time in the bluegrass brought her a taste for bourbon, she says, “Jack Daniels and bourbon — when I was younger, my body could stand that kind of thing. Now, it’s strictly champagne! I need something light and
effervescent.”