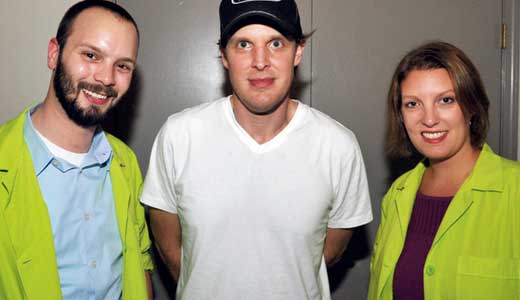 Music couldn’t exist without scientific breakthroughs (electricity, LSD), but the relationship often goes unexplored. The Louisville Science Center takes a fun step toward closing that gap with their next exhibit, “Guitar: The Instrument That Rocked the World.”

The show aims to explore its history and evolution, from lutes and lyres to Dimebag Darrell and Jack White. Details on a local concert series, featuring favorites like The Ladybirds, Natives and Trophy Wives, will be announced soon as a companion to the exhibit.

A preview this Saturday at 7 p.m. doubles as a fundraiser called “Science with a Twist.” Headlining the event is classic rock quasi-icon Rick Derringer, whom you might remember for hits like “Hang On Sloopy,” recorded with his band The McCoys when he was 17, his solo favorite “Rock ’n’ Roll Hootchie Koo,” and Hulk Hogan’s theme, “Real American.” Derringer has also played with Alice Cooper, Todd Rundgren, Cyndi Lauper and Weird Al Yankovic, and has toured as an opener for the Rolling Stones and Led Zeppelin.

Soul Inc., Greg Martin of the Kentucky Headhunters, and Wax Fang’s Scott Carney will also perform. There will be a preview of the IMAX film “All Access: Front Row. Backstage. Live!,” which includes footage of B.B. King, The Roots, Santana, Sheryl Crow and Trey Anastasio. The benefit will be hosted by J.K. McKnight, captain of the Forecastle Festival, and Ashley Capps, president of AC Entertainment, producer of the Bonnaroo festival.

A silent auction will sell off guitars signed by The Beach Boys and Peter Frampton. Preview tickets are $100, which includes an hors d’oeuvres dinner, cocktails and karaoke; if you want to also enjoy Derringer’s concert, those tickets are $250. The 5,000-square-foot exhibit opens to the public on Sunday and runs through April 22. For more information, go to louisvillescience.org.