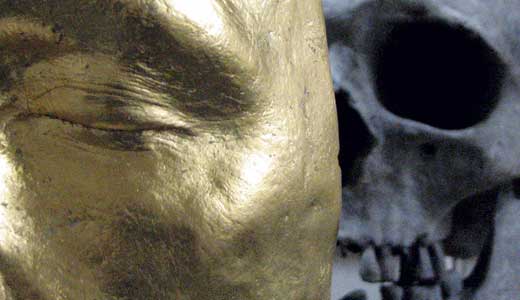 First of all: It is hot and heavy in the conceptual arena — with subject matter spanning from evolutionary biology to psychology to speculation on the extinction of the human species. You have to work for it — in addition to the sculptures, there are eloquent and engaging artist statements explaining the derivation of titles, inspiration, scientific concepts explored in the work — it’s layered, it has footnotes, it’s the sculptural equivalent of a T.S. Eliot poem.

Secondly, you’ll sweat because you have to walk all over Actors Theatre to see it. Two pieces in the foyer outside the stage entrance, one in the stairwell that goes to the balcony, one more upstairs, with the bulk of the work in the Victor Jory lobby on the third floor. Both times I went (during intermissions for plays, with people packed in the building with time to kill), the Jory lobby was completely vacant. Not only does the physical distance between the pieces make it hard to understand his conceptual arch, but for the most part, Weir’s work is on display amidst a prolific amount of landscape paintings by Nana Lampton.

Lampton and Weir, accomplished artists in their own rights, make awkward visual bedfellows. Their work does not rhyme, and nothing is gained by viewing them together. The contrast is distracting, and after accounting for everything else on the walls — photos, show advertisements, signage — it feels a little bit like going to an art show at a T.G.I. Fridays, which must be a letdown for a sculptor who has invested so much time and so many resources in the careful execution of his work, only to be sold short in this particular way. I wouldn’t have even known half the show was there if I hadn’t asked around.

Regardless of circumstance, I’m glad Weir is showing his work. An accomplished craftsman and professional sculptor, he has had limited showings of his personal work since his BFA show at U of L in 2004, which featured “Reproduction Stress” and “Death Drive: Go With the Flow,” a sculpture so beautifully compelling that I had to remind myself not to touch it the whole time I was in the gallery. His “Zoon Politikon: The de Waal Group” featured in the Victory Jory lobby shares the tactile allure of that previous work. Silhouettes of bonobos and chimpanzees, our genetic cousins, participating in acts of violence, conflict resolution and sexual negotiation, are made out of sculpted synthetic grass. The bodies are finely crafted, and the faces are emotive, haunting and distinct. Running the gamut of possible primate behaviors, it is an illustration of the diversity from which we as a human species arise. This is certainly the strongest work in the show; too bad it is up where few people are likely to see it.

“X/Y” and “Spear bearer,” featured in the lobby gallery, are somewhat less accessible. “X/Y,” which is composed of a brain, a skull and a golden human face relief elevated on Lucite poles, comes off as a play on a natural history museum display, while “Spear bearer” is a farce on classical Greek sculpture. You would think all of the realism he employs would lend itself to easy understanding, yet I struggle to interpret it. With these pieces, I felt somewhat dependant on his explanations. Possibly in the context of his other works, it would have been more obvious.

Weir is an incredibly proficient technical sculptor. His figures are beautifully proportioned, and he executes every object skillfully with obvious respect for material. The way he draws the parallel between the analogous texture of primate body hair and AstroTurf shows a tremendous and playful eye for creative use of non-conventional materials. Weir succeeds most profoundly when he is driven by his materials and riffs on conceptual niches, but his brilliance is obscured when he relies on realistic, literal translations — exposition rather than interpretation. I want to see him get more Philip K. Dick on his subject matters, with more showing and less telling. I want more things to marvel at, more things to feel compelled by, more things I have to remind myself not to touch.