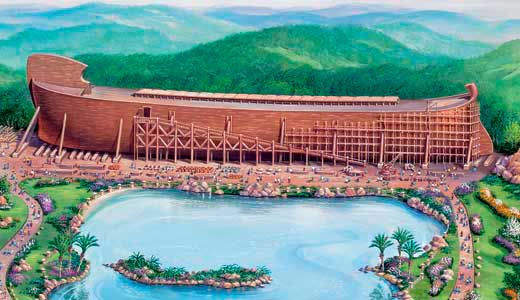 On Jan. 17, Gov. Steve Beshear presented his proposed two-year state budget, which includes “painful cuts” of up to 8.4 percent in many agencies in order to make up for a nearly $300 million shortfall.

“It’s a budget that — to be candid — is inadequate for the future needs of our people,” Beshear said.

Of the $286 million in cuts, $50 million is from the funding formula for K-12 schools, along with a 6.4 percent cut to higher education, which Beshear notes will “risk jeopardizing progress we’ve made over decades in education.”

However, $11.1 million was allocated in the transportation budget to fund road improvements for KY-36 in Grant County, from its interchange at Interstate 75 through a mile west in Williamstown, a town with a population of roughly 3,500.

Why such a high price tag? To accommodate the millions of visitors from around the country that the Beshear administration expects to visit Ark Encounter — the proposed evangelical theme park featuring a “life-size” model of Noah’s Ark, which is the brainchild of the Answers in Genesis ministry.

Beshear has already taken heat — and turned Kentucky into the butt of many a joke around the country — for championing $43 million in possible tax incentives for the park’s owners, despite separation of church and state concerns.

Others question the wisdom of Kentucky — which Beshear admits struggles due to the lack of an educated labor force — endorsing a project that will send this “educational” message: the “historic truth” of a worldwide flood a few thousand years ago, in which a 600-year-old man and his family wrangled two of every animal (including dinosaurs) to safety on a giant wooden boat.

But as Kentucky prepares to spend millions on transportation infrastructure for the park, many are beginning to wonder if and when Ark Encounter will ever be built.

Ark Encounter LLC initially announced that their groundbreaking would be in the spring of 2011. That date was pushed back to the summer, then the fall, and eventually to this spring.

Accompanying this delay was a stall in fundraising. Though Answers in Genesis had managed to raise $3 million of its $24.5 million goal in May of 2011, by mid-December, their total was stuck at $4.3 million.

Though Tourism Cabinet officials tell LEO Weekly they have not been in recent contact with park representatives, emails obtained via open records request reveal Answers in Genesis has in fact shared details about difficulties getting the project off the ground.

In response, Zovath replied: “Todd, we actually considered an official ground breaking earlier this month but too many complexities got in the way so we ended up putting it on hold until everything is worked out. Funding is progressing, a little slower due to the very slow economy.”

Zovath went on to list issues concerning permits and the purchase of property that continued to delay construction. Despite difficulties raising money, he optimistically stated that they would begin taking visitors even before their planned spring of 2014 opening.

In a Dec. 29 story in The Christian Post, Answers in Genesis disputed previous LEO Weekly reports on sluggish fundraising and delayed construction, countering that December and January are their best fundraising months, and they should see “another spike” by mid-January. However, according to their website, funds raised still remain shy of $5 million.

As for the road construction laid out in the Transportation Cabinet’s six-year highway plan, the 2013 fiscal budget allocates $850,000 to the initial design phase, with the following year spending $400,000 acquiring the right-of-way and $750,000 relocating utilities. The road construction, which totals over $9 million, is budgeted for 2015.

Transportation Cabinet spokesman Chuck Wolfe says the $11.1 million figure was derived from a preliminary study using traffic modeling for four different yearly attendance scenarios for Ark Encounter — the low figure being 900,000 and the high figure being well over 2 million visitors by its 10th year.

Such attendance figures would rival King’s Island near Cincinnati, one of the highest-attended thrill ride parks in the country. Ark Encounter has only announced one future ride at their park: a slow-moving track in which one experiences “the 10 plagues of Egypt.”

But Wolfe notes that just because a project is funded in the governor’s budget does not necessarily mean it will go forward.

“The legislature can and does amend the highway plan,” Wolfe says. “So it’ll be a while before we know what the actual plan provides for.”

If Ark Encounter winds up not being built, the good news for taxpayers would be that the company would not be eligible for the full $43 million in tourism tax incentives. And while those in Grant County would be burnt — as they have already given land and tax breaks to the owners, in response to promises of jobs and prosperity — they might end up with some very nice wide-laned roads for their drive through the farm land west of tiny Williamstown.

LEO asked the Beshear administration if they are concerned about spending millions of tax dollars on infrastructure for a project with such financial difficulties, but they deferred all questions to the Transportation Cabinet.

Others who might lose out if Ark Encounter never comes to fruition are the people who have given Answers in Genesis nearly $5 million in donations for the park, without receiving any disclaimers about refunds.

When asked by Talking Points Memo in December if Answers in Genesis would return funds in such a scenario, Zovath couldn’t say.