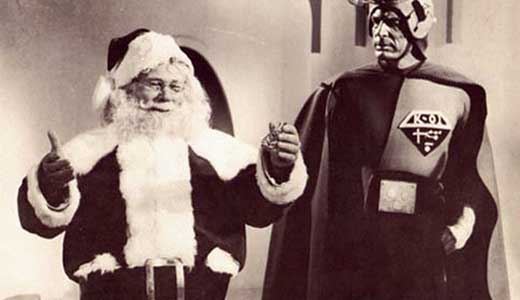 Being LEO’s resident video junkies, we dread this time of year. We keep our office door locked, chained and double-ironed in anticipation of our mercurial editor, the Ghost of Girlfriends Past (i.e., the Bar Belle), who always demands some seasonal cinematic silliness. Alas, do we hear her rap, tap, tapping at our chamber door?

“Hey, you wankers!” she bellows, spewing microbrew across her ample bosom, hove against the groaning unvarnished portal. “Gitcher hand outcher pants and write me a got-tammed Christmas piece! We gots to make some small provision for the poor and dest-tute, ya know? Haw!” A splash of foam forms slug-like and thick beneath the weathered timbers as we hear her collapse slowly to the floor, thumping into a moist heap of tobacco, barley and tramp-stamps.

Are there no prisons, no workhouses where we might find succor from this harlot? Man, there’s never a savior around when you need one … we need a super-hero! Let’s see, all the Marvel guys are tied up making “The Avengers,” so maybe Santa can save us. He’s saved the world several times before, you know? What!? You never heard? Well, pull up an ice cube and prepare for some real Christmas magic.

The first time Santa saved the world was back in 1915, and all the action was caught on film as “Santa Clause vs. Cupid: A Christmas Story.” This short romantic silent drama finds a pair of guys fighting over a rich girl while one of her family’s poor chauffeurs begs for money to take his sick wife to the doctor — all on the night of a ritzy holiday party. The guys both show up in Santa costumes just as the chauffeur takes drastic action. But who is that third Santa? Those who would never dream of buying a silent movie will be happy to know that this is not for sale. But you can watch it free at fandor.com/films/santa_claus_vs_cupid.

It was nearly 45 years before Santa recovered sufficiently from that adventure to save us all from Satan’s power (as we had gone astray) in “Santa Claus” (1959; aka “Santa Claus Conquers the Devil” and other names). This silly slab of celluloid insanity came from Mexico and was picked up by The Man With No Scruples, aka K. Gordon Murray, who made a career out of stealing already wretched off-shore kiddie, sci-fi and horror films — sometimes splicing several of them together — and writing new English dialogue to create something, well, creepy.

Here, the devil decides to wickedly disrupt Christmas, so he sends the demon Pitch to do icky things to Santa. Meanwhile, from his vantage in a castle high in the clouds, packed with improbable high-tech surveillance equipment (thanks to Merlin the Magician) and staffed by thousands of internationally dressed Mexican children, Claus goes about preparing for his big night. None of which explains why this is the single most disturbing Christmas movie we ever saw (and that includes that one where Michael Keaton dies in a bloody car wreck and comes back to life as a snowman to horrify his family. WTF?). Yeah, Santa seems to get way too excited while spying on those the kids, and Pitch is the most irritating character ever conceived, but what is it that makes this so infamously awful? Probably timing.

Made before Rankin-Bass or Disney defined the family-friendly/holiday movie, this one is based on the premise, “If you want to make a kid squeal, just make his parents squirm.” This thing can clear a room. It can clear a building. Any adult who can sit through all 94 treacly, intestine-twisting minutes could drink their own bath water. Of course we like it! Newly available in something of a collector’s edition with both the original Mexican version and Murray’s abomination, plus nice bonus stuff, for $14.95.

After that, Santa swore off Mexico and rested until 1964 when he had to face down the Red Menace in “Santa Claus Conquers the Martians.” It seems that Martian parents, who suck almost as bad as Earth parents do, got upset when their kids fell in love with Santa after seeing him on Earth TV. So the parents do the loving thing in this season of giving: They kidnap him.

A pair of Earth kids accidentally become part of the interplanetary plunder; one of them would someday grow up to be Pia Zadora, most famous for having a Top 40 single with Jermaine Jackson from the movie “Voyage of the Rock-and-Roll Aliens” (1984), and being raped by a garden hose in “Butterfly” (1983). But Santa, being such a happy, jolly soul, so infects the grumpy, antenna’d idiots of Mars with Christmas cheer that they decide to fly him home and create their own Martian Santa. The end.

We’re poking fun, of course, but “Conquers the Martians” is a permanent part of our Christmas festivities — it simply wouldn’t be Christmas without it! As asinine and stupid as it is, it is also so haplessly, hopelessly gosh-awful innocent and sweet that you can’t help but swallow the whole “Santa and the Christmastide be praised” pishposh and feel somehow better for it. It’s available everywhere in the under-$10 discount bin, but the best version is part of the “MST3K Essentials Collection,” which also includes “Manos, the Hands of Fate” for under $40. That one makes a sweet Christmas gift.

“Uhhhh, I don’t ’ear any got-tammed typin’ in there!” Ah, our yeasty floor-princess has awakened. Time to slip a little something ’tween her stockings, eh Guvnor? Merry Christmas.

Keep up with David and Bill at www.videotapeworm.com.