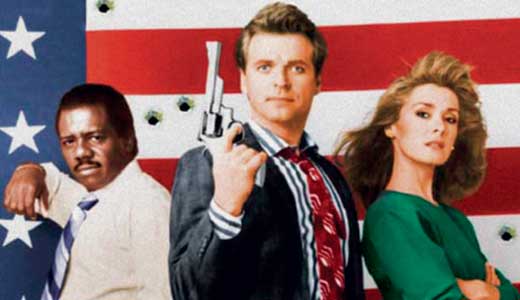 This remake of the terrific Chris Sarandon/Roddy McDowall/Amanda Bearse horro-comedy may suffer in comparison, but not egregiously so. Colin Farrell is excellent, as always, as the vampire next door; Anton Yelchin is competent as the kid who discovers him; David Tennant admirably fills Roddy’s shoes as the celebrity vampire hunter; and Imogen Poots is outstanding as the vampire’s virginal victim. What really makes this rise above, however, is a great script Marti Noxon, who wrote some of the best “Buffy” episodes back in the day. Gangs of fun.

Right up front: We are probably the only geeks on the planet who remember (much less enjoyed) this short-lived TV spoof of Dirty Harry movies. David Rasche was great as the titular nutcase with a badge who fired warning shots at jaywalkers and put would-be snitches into comas. But it was after they ran out of easy jokes that this thing really took off: Our favorite bits were the “bad guy who wouldn’t go down” — yelling “Ow!” as he was punched, kicked, knifed, shot and bludgeoned, instead of immediately lying unconscious like they do on TV — and “Hammeroid,” a spoof of “RoboCop” that goes completely over the top. All 41 episodes on five discs.

Motorcycle Grand Prix racing came into its own in 2002, after dropping the 500cc class in favor of the 990cc four-stroke bikes (further reduced to 800cc in 2007 to take advantage of new technology). During this period, MotoGP has dominated the field, resulting in some of the most thrilling races imaginable. This doc tells that tale, focusing on the specific rivalries — and crashes — that have defined the sport.

A pair of welcome — and all but forgotten — gonzo crime films from the ’70s. In the first, Richard “The First Dumbledore” Harris is ordered by his mobster boss (Edmond O’Brien) to rub out a rival against a backdrop of albino alligators, great car chases and a one-handed killer with a kit of snap-on weapons (Chuck Connors!). Directed by John Frankenheimer, this co-stars the wonderful Ann Turkel. And in “Nickel,” a lot of big stars populate a grim world of crime and murder, including grinning death-dealer Bo Hopkins.

This universal tale of young newlyweds experimenting with their newfound sexual abandon is informed by its locale: Hanoi. A quietly sensual Vietnamese study of sexual history, education and power in modern women.

From cable TV comes this look at the various ways that mankind might bite the big one. A virologist considers how simple it would be for an innocuous virus to suddenly become a pathogenic killer. A preacher looks forward to his family becoming the next Adam and Eve. A pair of Brits once theorized that many apocalyptic tales were the result of meteorite impacts. And one Soviet official claims to have prevented nuclear destruction decades ago. You won’t sleep for weeks.

Now on Blu-ray, from the bent psyche of Charles Band. From anyone else, this would be just another late-’80s slasher flick set in a darkened grocery store, but Charlie knows how to delivery the groceries! (Ugh, sorry.) The checkout babe’s crazed boyfriend cuts the phone lines and starts murdering everyone in colorful ways with help from our buds at KNB Effects. With Sam Raimi, Ted Raimi, Bruce Campbell, Dan Hicks and a host of other horro-vets.

Jack Black and company return for another round of rotund Kung Fu in this sequel, which actually improves on the original. Now a more mature and seasoned martial artist, Po (Black) must face the newly invented scourge of gunpowder in the hands of an evil lord (Gary Oldman). Dustin Hoffman returns as Po’s mentor and is joined by newcomers Dennis Haysbert, Jean-Claude Van Damme and Michelle Yeoh. Recommended.

This doc, a major art-house hit, follows the love affair of two adults with Down Syndrome trying to build an independent life for themselves, just like everyone else. The most interesting part is not the two young lovers, themselves — who find that they are able to do things together that they cannot do alone — but their parents, who are afraid to let them try.

This underrated little biopic on the life of Sgt. Major John Philip Sousa, leader of the Marine Corps Band, stars Clifton Webb, gorgeous Debra Paget and Robert Wagner as his long-time friend, Willie Little, the man who invented the Sousaphone. Well, sort of. Actually, neither Paget’s nor Wagner’s character actually existed, but the life of Sousa was nonetheless filled with excitement, romance, intrigue and great events in American history. Very much a film product of the early ’50s, and gloriously so.

Robin Weigert from “Deadwood” stars in this inspired little haunted Western. She discovers the ghost of a Civil War soldier in her house, so she does the obvious thing: Gives him the body of a recently dead man so he can live again! A decidedly different take on the ghost/possession film that takes a female perspective without going all chicky-flicky. We liked it.

If you’re looking for a nice, quick Christmas gift for just about anyone, here it is: All three Michael Bay “Transformers” movies in a boxed set — DVD or Blu-ray, your choice for $10-$15 a film. Contains the original “Transformers,” the dreadful “Transformers: Revenge of the Fallen” and nicely over-the-top “Transformers: Dark of the Moon,” all starring Shia LaBeouf.