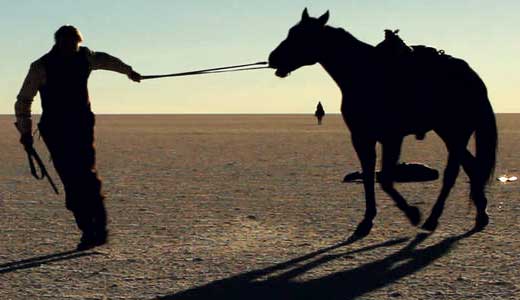 Sam Shepard stars as Butch Cassidy, aka James Blackthorn, in this revisionist, straight-to-video Western set in Bolivia. Having somehow survived the Army bloodbath at the end of “Butch Cassidy and the Sundance Kid,” Blackthorn now wants nothing more than one last sight of his home in America, but the lawmen — and gangs — on his trail have other plans. Into this morass wades Eduardo Noriega as a young thief whom Butch reluctantly takes under his wing. Worth checking out.

A new black comedy by John “Animal House” Landis starring Simon Pegg and Andy Serkis, co-starring Christopher Lee, Tom Wilkinson and Tim Curry … and it never came to American theaters? WTF? Pegg and Serkis are the likeable murderers who snatch corpses (some of them still walking around) to feed the hungry anatomy tables of Drs. Wilkinson and Curry in early 1800s Edinburgh. So who are really the bad guys here? A nice throwback to the old Ealing Studios days; worth seeking out.

Zoe Saldana is perfectly cast and kicks butt nicely in this “little girl trained as a super-assassin grows into womanhood” actioner. Similar in plot to the recent “Hanna” and “Salt,” this is less action and more touchy-feely once the early training scenes have passed. Not the over-the-top kill-fest that everyone expected, but bloody good in its own right.

This competes with “Soul Surfer” for the best kid-friendly loss-of-limb movie of the new millennium. Based on a true story, the tale tells of a troubled young boy who finds a dolphin washed up on the beach, near death, its tail badly mangled. Without its tail, the dolphin, named Winter, has no chance of surviving — until Harry Connick Jr. and Morgan Freeman come along. For PG, this is a very deep flick on many levels, and there is so much more to the plot than we can cover here. Co-stars Ashley Judd and Kris Kristofferson; highly recommended.

HOW BEER SAVED THE WORLD

As any student of anthropology knows, it was beer that allowed early man to move from the hunter-gatherer lifestyle to agriculture, since it meant a reliable, disease-free water supply, year-round. This great doc goes further, explaining its role in the building of the pyramids, the founding of the New World, and the industrial revolution, among other things. Fun.

While we thought the ending was weak, this succeeds in being not only one of the best slasher films we ever saw, but also a great spoof of slasher films. When young Edwin checked into the Bonzo Ranch Clown Camp to hone his trade, nobody laughed. Bad move, dudes! He went nuts and slaughtered everyone; floppy shoes, red noses and all. Now, decades later, they are opening the Bonzo Ranch once again. Will they never learn?

MEET ME IN ST. LOUIS

One of the best American musicals from the Golden Age, now available on Blu-ray. Set at the start of the 20th century, Judy Garland and her three sisters are swept up in the excitement of the new millennium, the World’s Fair — and a new boy next door! — when their father announces that they are going to move from their home in St. Louis to the burgeoning metropolis of NYC. A minor plot, we grant you, but the cast is so strong, the writing and directing so spot-on, and the music — including “The Trolley Song” and “Have Yourself a Merry Little Christmas” — so timeless, we challenge you to find a better flick.

There are very few true mystery films anymore, having been run out of the theaters by horror, gore, suspense and action. But this French/Portuguese epic — at more than four hours! — is the best true mystery we’ve seen in a coon’s age. A jealous countess (breathtaking Maria Bastos), a rich entrepreneur and an orphan weave a surreal tale of, well, mystery, that will suck you in and leave you breathless. Not to be missed.

Not the great 1967 Lee Marvin flick by John Boorman, nor the 1998 Mickey Rourke/Danny Trejo shoot-’em-up, but another damn good crime-and-revenge caper, this one from France. Gilles Lellouche (“Sherlock Holmes: A Game of Shadows”) stars as a male nurse who saves the wrong patient, a criminal whose gang kidnaps his pregnant wife as leverage to get their boss sprung.

Oh, baby! What a hoot! Aka “Saint” and “Sint,” this is a thoroughly original (and damn bloody) reimagining of the St. Nicholas legend, except that here the jolly old fellow is a delightfully murderous bishop who kidnaps and kills village children. The villagers finally get tired of this and execute him and his gang, but not before he curses all their descendants. A surprisingly funny and wonderfully demented new holiday tradition from the Netherlands.

The Sam Peckinpah original starring Dustin Hoffman and Susan George is one of the defining films of the 20th century. So why remake it? Hellifweknow, but it’s very watchable. Now set in rural Mississippi, James Marsden stars with the exquisite Kate Bosworth in a tale of redneck fear come to life. Nowhere near as subtle, nuanced or as powerfully shocking as the Peckinpah version. The two make a great double feature.

This release from the Investigation Discovery (“ID”) channel’s police-procedural series features a local tale. “Closing Time” tells the true story of Jerry Monroe, a local lad who opened his own neighborhood bar — which is where his body was discovered. Was this a robbery gone wrong, a grudge-killing, or part of an escalating gang-war by area bikers? The eventual truth surprised his family, friends, patrons and the whole community.

This macho outing is held back by its lame PG-13 rating but succeeds by the strength of its cast. Nick Nolte is the father who trained his sons how to use their fists. One son (Joel Edgerton) becomes a schoolteacher while the other (Tom Hardy) joins the Marines. They reunite in Pittsburgh after their wife/mother dies, and the three consider a new career in the Ultimate Fighting circuit. Co-stars skinny-hot Jennifer Morrison from “House.”