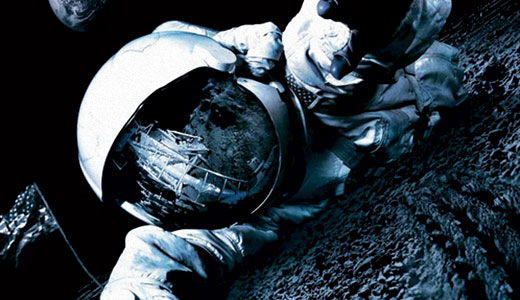 This “found footage” movie is a minor hoot — and almost makes other found footage movies obsolete. Officially, of course, Apollo 17 was the last manned mission to the moon, but according to this flick, we sent two Americans there later on a secret Defense Department mission — and they never returned. So, what did they find that was so dangerous that the world must never know? Oooo-weee-oooo.

Tony Todd returns to the franchise in this outing, shot in 3-D. You surely know the plot by now: Someone sees a tragedy about to take place and warns others, saving their lives. But in doing so, they have cheated Death, who reaches out to claim them in clever, horrific and entertaining ways. This one stars Nicholas D’Agosto, Emma Bell, Miles Fisher and Courtney B. Vance; the necessary disaster is a bridge under repair that fails in high winds, an all-too-sensitive subject around these parts right now. Fun, as always.

When their party palace is about to be taken away, a group of overgrown children — Jason Sudeikis, Lake Bell, Michelle Borth, Nick Kroll, Tyler Labine, Angela Sarafyan, Lindsay Sloane and Martin Starr — decide to send it off in style by throwing the most debauched, over-the-top party-to-end-all-parties anyone has ever seen. Not as off the hook as we’d hoped, but still a fun ride, particularly with Borth, who knows how to be both sexy and funny.

From low-budget film vet Trent Haaga (the underrated “Jessicka Rabid”) comes this horro-comedy starring Troma-ite Billy Bakshi/Will Keenan as a guy in a “Saw”-like predicament: He is forced to reveal his dark, secret past while removing his own limbs. Seriously warped and oddly funny.

Writer/director Rob Moretti’s semi-autobiographical treatise on how awful it is to be him. With his upper-middle-class life peppered with family dysfunction and drug abuse, the young man turns to the arts to find solace. There he is seduced by a gay theater coach, which sends him into a spiral of more drugs and alcohol. What is he to do? Apparently, write a screenplay and tell us about it.

OK, we didn’t really “get” this drama, but others we’ve shown it to thought it was great. Michael Bershad plays the dispatcher at a limo company who must balance his sense of failure over his job — which he feels is beneath him — and the admiration that his co-workers have for him. Throughout it all, he must also react politely to all the petty, rich, pretty people who are his clientele. Make it or break it? You tell us!

Right up front: We are not fans of this hateful “dismemberment for fun and profit” franchise. This one’s just more of the same, now set in Las Vegas. So why are we mentioning it? Because it stars local boy John Hensley as one of the grindees. Born rat-cheer in the River City, he is best known as Matt from “Nip/Tuck” and had regular roles on “Witchblade” and “Madigan Men.”

IN THE NAME OF THE KING 2: TWO WORLDS

A bio-doc on the extraordinary Jane Goodall, whose 45-year in-the-field study of wild chimpanzees has quite literally changed both what we know about them and ourselves. But beyond her famous work, Goodall is so intensely private that little is known about the person behind the legend. The filmmakers do a good job of revealing both the woman and her work.

A first-ever compilation of 17 shorts featuring our favorite WB character, a French Don Juan skunk, constantly on the prowl for female companionship. Why do we love him so? Well, being created by the immortal Chuck Jones and voiced by Mel Blanc, we guess we’re just scent-imental.

What a wonderful little stinker! In a small-town hospital, deranged doctors are implanting chips into the brains of dying patients — with unpredictable, reality-bending consequences for the populace at large. A wickedly wild horror/sci-fi outing with splatter-vets Katie Featherston from the “Paranormal Activity” series, Reggie Bannister and buxom Shannon Lark, 2009 Spokesmodel for Fangoria Entertainment. Tons o’ fun.

THE BORGIAS: THE FIRST SEASON

First video release of this powerhouse Showtime series starring Jeremy Irons, François Arnaud and Holliday Grainger (as Lucrezia), with skinny-sexy Lotte Verbeek to do any nude scenes that Grainger refuses to do. A shocking, complex — and completely true! — tale of power, corruption and the ruthlessness of the Catholic church in 15th century Italy, beginning with Rodrigo (Irons) ascending to become Pope Alexander VI.

If you liked HBO’s “The Wire,” you will love this three-season, 39-episode Australian series, based on the real-life organized crime war that rocked Oz for nearly three decades. Extremely complex, very human, shocking, unbelievable at times, and truly engrossing, this series follows both the Purana Task Force, charged with reigning in the burgeoning lawlessness, and underworld figures — both the mighty and the meek — that threatened to destroy Down Under society. Exceptional TV.