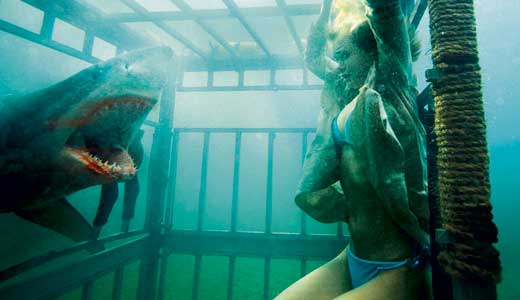 The latest in the venerable “Girls Gone Wild” franchise, this one features hot young college bimbos from rat-cheer in the River City. Topping the list is Kara, “an all-American girl-next-door brunette from Louisville” who “just happens to love sex and loves letting you watch her lick her own hard nipples!” Clearly a Seminary student in need of a stern father figure. Why they don’t have an Oscar category for this is beyond us.

A bevy of bikini-clad coeds — including yummy Sara Paxton, Katharine McPhee and Alyssa Diaz — flounce in the sun and bounce around the Louisiana shoreline in their undies, waiting to be eaten by Cajun sharks. Entertaining as hell, this PG-13 tease-fest from the director of “Snakes on a Plane” is a spicy gumbo of gory fun. Would we jambalaya to you?

Warren Buffett, former chairman of the mega-billion-dollar Berkshire Hathaway money machine — and one of the few men in the world who ACTUALLY has more money than God — famously appeared on “60 Minutes” in December of 2011 to declare that he — and many other super-rich white guys — don’t pay enough taxes and are running the U.S. economy into the ground. We cried.

Isaak, a familiar presence at The Palace and other Fourth Street venues, puts on one of the best live shows you’ll ever see. With an amazing voice and impeccable stage presence, his songs are a mixture of natural vocal talent with brilliant — and often comic — lyrics. This disc features Isaak at his electric best, plus a short list of intimate acoustic surprises and some special guests. Recommended.

This big-budget pandemic blockbuster from director Steven Soderbergh has a simple premise: Everybody in the world gets sick and dies, giving a list of A-level hams a chance to croak heroically on camera. Dirt-napping thesps include Gwyneth Paltrow, Matt Damon, Laurence Fishburne, Jude Law, Marion Cotillard and a host of European stars to help the off-shore sales. An exciting, suspenseful and damn scary adventure that’s hindered by its PG-13 limitations. We liked it.

DON’T BE AFRAID OF THE DARK

Guillermo del Toro’s remake of the classic spooker from 1973. Bailee Madison stars as the girl who discovers that unseen creatures in her basement mean to do something really awful to her. Adult stars Katie Holmes and Guy Pearce do the usual dumb things that adults do in movies like this while you wait to get a good look at the CGI beasties. A good, solid, old-school suspenser with a few shocks, but the R-rating is bogus.

I DON’T KNOW HOW SHE DOES IT

Sarah Jessica Parker takes her “Sex In The City” modern super-woman shtick in a new direction: How to balance professional and family lives? It’s all over-the-top and never tries to be “real” in any sense, but a fun romp nonetheless with Pierce Brosnan, Greg Kinnear, Christina Hendricks, Kelsey Grammar, Olivia Munn (who nearly steals the show) and a host of other once-shiny faces.

MAN IN A SUITCASE SET 2

If you’re a fan of “Burn Notice” or the old Patrick McGoohan “Secret Agent” series, you’ll love this! “Man in a Suitcase” follows the exploits of Mac McGill, a former CIA agent with a bad reputation who now makes his living doing the lowest, most dangerous freelance spy gigs. He’s always up to his holster in scotch, smokes and dangerous mini-skirted molls — or car chases and room-wrecking brawls — in colorful, exotic locales. But Mac is cool under pressure and knows how to get the job done. This is almost too much fun.

Kate Winslet gives it her all in this ambitious HBO miniseries based on the 1941 novel about pride, privilege and the ultimate futility of parenting set during the Great Depression. She gives snotty daughter Evan Rachel Wood everything she could ever want in life, but ends up being despised by her because of it. With Guy Pearce, Melissa Leo and Mare Winningham.

We don’t often mention these multi-pack offerings because they usually sandwich lousy movies in between better ones. But not this time. Here we find three good to very good flicks built around one of our favorite themes: lowly-humans-meet-benign-cosmic-intelligence. “Red Planet,” a troubled production starring Val Kilmer, is the weakest of the three, but still entertaining. “2010” is the sequel to “2001” — without Stanley Kubrick’s genius, but a solid bit of sci-fi, nonetheless. And “Contact,” starring Jodie Foster, is based on the writings of Carl Sagan, showing us the insignificant scale of human life in the grand history of the cosmos, but also our profound potential. Recommended.

We like this way-too-serious lycanthrope outing, if only for its ballsy plot. Felicia Day stars as the last descendant of the real Little Red Riding Hood, the original werewolf hunter. Today there exists an uneasy truce between wolves and humans, which she secretly enforces — until her fiancé gets bitten by Stephen McHattie (“Watchmen”), a new breed of super-wolf. Then the war is on!

Billy Burke (from those awful “Twilight” movies) stars with Mark Kelly, Emma Caulfield and Elliott Gould in a wonderfully unpredictable kinda-Gothic thriller about a tortured, pill-popping, hallucinating man who takes a job quietly cleaning up other people’s blood-stained carpets. Gory, with an oddly engaging cast — including statuesque Playboy Playmate Kelly Brook — this is worth checking out.

A mesmerizing nature documentary on the Okavango Delta in Botswana. With the local resources and available mates rapidly dwindling, a lioness embarks on a journey to give her three cubs a better chance at survival. But will they even survive the trip? And, with the number of lions in the wild plummeting 96 percent in just 50 years, is there any place for them left to go? From National Geographic and award-winning filmmakers Dereck and Beverly Joubert.