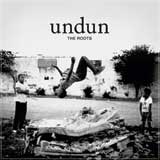 For some, having a day job means stifling your creativity. You put in your eight to 10 hours; then you feed, imbibe and fraternize, leaving no time to open your mind to putting something new into the world. It backs you up like too much cheese, and can eventually poison that part of you that wants to create, leaving you a stiff-shirted zombie going through motions. Nobody ever tell The Roots. undun is The Roots’ first “concept” album, detailing the death and life of one Redford Stephens. Through nine vocal tracks and four instrumentals, the album doesn’t have a second to waste. Stephens’ tale is that of deciding between street and square life, though one could extrapolate the band’s own process in deciding on maintaining the (unsustainable) nomadic touring life or the more family-friendly single area code lifestyle. The Roots have never lived and died by album sales, and having the 9-to-5 life of Jimmy Fallon’s house band has actually allowed for the band to forgo label concerns about singles and simply make one of the most powerful and compelling records of their career.