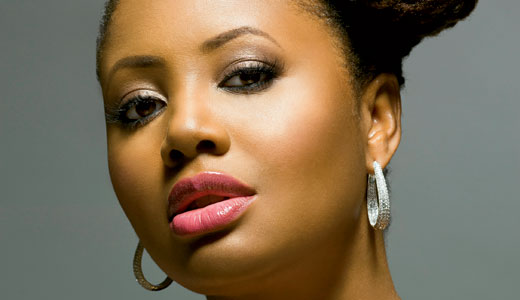 Being the daughter of the greatest soul singer of all time, Donny Hathaway, carries a lot of weight. Throwing one’s own apple hat into the ring, though, is precisely what Lalah Hathaway did. She initially shied away from speaking of her famous lineage in interviews, but, as her own catalog grew more impressive over two decades, she found a comfort level where she can embrace her last name without feeling any dependence on it. Her latest album, Where It All Begins (her second for the resurrected Stax label), came out in October, continuing her unique blend of grown-folks soul that isn’t afraid to get loose, while including some pop elements and even a rock-flavored track.

Best known to many for her massive Luther Vandross cover “Forever, For Always, For Love,” Hathaway’s first album was released in 1990. She revisits that album’s “I’m Coming Back” on Begins, telling LEO, “The live arrangement is so different from the original that I just knew I wanted to have it recorded with the band, because we get a lot of requests for it.”

Hathaway has surrounded herself with some of the best names in indie R&B, writing with Rahsaan Patterson, production from Mike City and J.R. Hutson (himself the son of Impressions vocalist Leroy Hutson, Donny’s college roommate), and singing with the reclusive Rachelle Ferrell, who is featured on the aforementioned “I’m Coming Back.” Ferrell’s presence on the song was settled in “15 minutes,” Hathaway says. “(Rachelle) called and said, ‘Hey, are you working? I was gonna hang out.’ I asked her, ‘You feel like working?’ Just that quick. I try to keep as great company as I can. Your own work steps up when you’re around great people.”

Though she can’t pick a favorite on the new record, Hathaway says about the title track, “I often start with the second song. Not saying it’s my favorite, but I find I start there and work my way back to one.” What could easily be this spring’s omnipresent wedding song is her remake of her father’s “You Were Meant for Me.” The song has an undeniable groove and a tasteful string arrangement, doing easy justice to the original. “I knew I probably wanted to do one of my father’s songs,” she says, “and felt like that song best complemented the body of work that I was already creating. It just fit.”

Of her live show, Hathaway is confident. “It’s going to be a great show. I’ll give you as much of the last 20 years as I can. I travel with a stellar group of musicians, and our intention is to smash it every time.” Likening music to a train ride, traversing the various mountains and plains of the highest and lowest of emotional settings, she is affirming. “I really want you to come to the show and feel elevated, and feel like there’s something inside you that you want to create, whatever that may be. I just want to transport you to wherever it is that you need to go.”