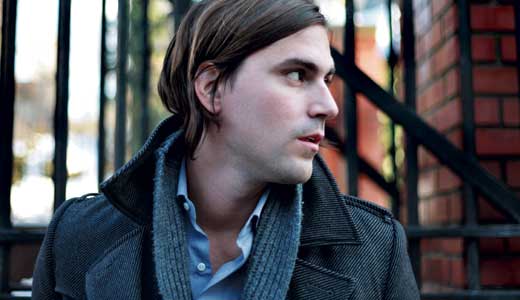 With a lush sound that could easily be mistaken for Nick Drake, Diego Garcia shouldn’t have a hard time tugging at your heartstrings. Diego had time to catch up with LEO before his Saturday appearance at Zanzabar to let us know how his songwriting process has changed since his departure from Elefant, how he ended up on “Jeopardy!” and why no man is an island.

LEO: What can people who haven’t seen you before expect from your live show?

Diego Garcia: The arrangement is unique in that a cello and a Spanish guitar are in the nucleus of the sound. The show unravels like the album and retells the story of Laura. Our strength lies in the vulnerability of the music and instruments on stage. We actually take pride in how quiet we can sometimes get. This creates an awesome drama. It’s all very raw.

DG: I don’t have one show that sticks out. But in the early years, I let my insecurities sometimes take over my performance, which can really take a toll. That is not a nice feeling. Funny shows, that’s a different story. We played an acoustic tableside rendition of “Nothing To Hide” for Sylvester Stallone one night in Miami. Surreal. Rocky!

LEO: What was your songwriting process for your latest solo effort?

DG: It’s all about having something to say, and I had lots to get off my chest. This, combined with a structure, time and a guitar, is really all I need. It was also the first time I collaborated with different musicians in the writing phase. It was all natural and, in the end, helped take the songs to the next level, both lyrically and musically … the irony being that I never let anyone “in” when I was writing for Elefant — and, yes, for my “solo” album.

LEO: How similar is the solo songwriting process to that of working as a group?

DG: Writing the song is the same. What changed was the way the song gets arranged in the studio. It was much more of a conceptual approach that involved countless demos. And years of experimentation. It wasn’t until I started working with Danny Bensi on cello that the sound really started taking shape. The producer, Jorge Elbrecht, was also an incredible force of creativity and ideas.

LEO: If you could collaborate with any composer, living or dead, who would it be?

DG: I’m a huge fan of the Bossa Nova movement out of Brazil in the ’60s and would have loved to have written with Vinicius de Moraes, Jobim, Bonfa, Getz, etc. Aside from it being so appealing musically, you can’t beat the locations — Rio, Ipanema … You get a nice tan while in the studio? A beautiful thing.

LEO: Have you ever been to the Central Indian Ocean, and are you aware there’s a sizeable land mass named after you?

DG: No, I’ve never been there, but I was a question on “Jeopardy!” for $1,000, in the category “Men Who Are Islands.” I was actually a picture question, which is even more insane. YouTube it for a laugh.

LEO: How many guitars have you smashed on stage?

DG: Not one. But my Laura has broken a few. It’s out of love. Crazy love.

LEO: What was the last album you bought?