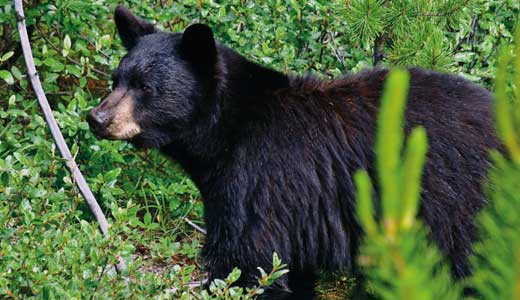 Courtesy of KY Dept. of Fish and Wildlife

As late as sundown on the last day of Kentucky’s third-ever black bear hunting season, the year looked like a bust. The season was short, just Dec. 10 and 11, and limited to specific areas in three southeastern counties — Harlan, Pike and Letcher. A total of 10 bear tags had been approved, but only one had been claimed: a relatively small, young male taken on private land in Harlan County.

Kentucky’s Department of Fish and Wildlife Resources manned three check-in stations. One of them was at Mountain Outdoors, a sporting-goods store in the town of Baxter, not far from Harlan. The owner, Brett Turner, was watching TV with members of Fish and Wildlife — Steven Dobey and Joe McDermott — as hunters came in and out, complaining about their luck. In addition to a check-in station, Mountain Outdoors had become a place to exchange information, but none of it seemed to be paying off.

The day before, friends Eddie Wells and Ed Drake walked into Mountain Outdoors to see if any bears had been checked in. They’d come down from Mount Sterling for the hunt. Drake admitted he was “sure he was making every rookie mistake,” but he was enjoying himself. Wells said that a bear is one of the last animals on his hunting to-do list. But as he gets older, he questions how much longer he’ll be able to sit on a ridgeline, sometimes with snow on the ground, and wait days for a bear to come into view.

On the first day of the hunt, Turner himself woke up early, grabbed his bow, and went into the woods, but didn’t even see a bear. “I wish I had some tips and tricks,” he says. Still, “It’s pretty neat to go out and have a chance. Twenty years ago, it was mostly just squirrel and deer hunting.”

Now there are bears, turkeys, quails, bobcats and even a sizeable elk population.

Despite living and hunting in Kentucky all his life, he’d never even seen a bear until he walked out of his house in 2006 and saw one going through his trash. His story is typical in this part of the state. The fact that there are so many in the hills these days, and that the numbers can support even a short hunting season, is a sign that the forests in this part of the state are healthier than they’ve been in years.

To the brink and back

Stories of the state’s early settlements frequently refer to the bear population, and many reference Daniel Boone’s bear-hunting skill. But by the mid-20th century, there were few, if any, permanent bear residents in the state.

Unlike some other big mammals, their disappearance probably wasn’t the result of hunting pressure. What most likely removed them from Kentucky was the large-scale deforestation of the eastern United States during the 19th and 20th centuries. Some of it was only indirectly the result of humans; in the early 20th century, a fungus from an imported Chinese chestnut tree wiped out almost the entire population of American chestnuts, which in parts of southern Appalachia might have been as much as a quarter of the tree population. Their nuts were an essential source of food for black bears. At the same time, large-scale industrial logging was ravaging the eastern forests. There is almost nowhere one can go east of the Mississippi that has never been logged.

Eventually, new policies were introduced to mitigate the deforestation. Much of the landscape began to recover. Oaks and hickory likely took at least some of the space left by the disappearance of the chestnut. This took time, though. Forests need to be mature to sustain the levels of berries, nuts, carrion, larvae and insects that a 300-pound omnivore requires. Forests need successive generations of plant types to become mature. It took decades.

But in the 1990s, people in southeast Kentucky began to see bears again. Genetic studies showed that these bears were coming from two populations. One, unsurprisingly, was in the Big South Fork recreation area that straddles Kentucky and Tennessee. In 1996, bears from the Smoky Mountains were released there. But to the east, bears were crossing in from West Virginia and Virginia, presumably because the population in those states was increasing and because our forests had matured.

Dobey, who is the program coordinator for Fish and Wildlife’s bear program, is impressed with the explosion of Kentucky’s bear population: “In 15 years, we’ve gone from a few observations to hundreds.” A trapping program has provided 10 years of biological data. They know where bears prefer to den, where they tend to cross into Kentucky from neighboring states, and where their populations are strongest.

“It’s a very charismatic animal,” he explains. “If you want to see a bear — a real bear — just go hiking.”

In the store, where everybody is watching the Outdoor Channel, somebody calls owner Brett Turner to ask if any bears had been killed that day. “Just on TV,” he jokes.

Dobey is giving advice based upon his experience. Although it’s late in the year and some bears might be already in their dens, it was a bad year for acorns. Many bears should still be wandering the hills desperate to put on some fat before the snow hits.

The hunting is tightly regulated. Unlike on TV, hunters can’t just sit next to a deer carcass and wait for a target to show up. Likewise, bears eating garbage are off limits. Dogs have to be left at home. Females with cubs are protected. And, surprisingly, state-owned hunting land — Hensley-Pine Mountain Wildlife Management Area — is closed precisely because the population of productive females is so high there.

The only way to legally kill a bear in Kentucky is to go out into the woods, look for signs of bear activity or a natural food source like a stand of white oaks, settle down and wait. And wait. And wait.

Only Kentucky residents can buy a bear permit, and almost 500 were sold this year. If a bear is killed, the hunter has to register the tag over the phone or online. Then the bear must be brought to one of the check-in stations for its biological data to be collected.

Dobey explains that the hunting season is an important part of a public relations campaign on behalf of the bear.

When they first started getting hit by cars or going through peoples’ trash, they were seen as a nuisance. Now, “Classification as a game animal has elevated it. We see fewer instances of people shooting them as nuisances. Now, they give us a call.” And Fish and Wildlife is able to deal with the bears non-lethally.

Those calls have increased enough that Fish and Wildlife has had to hire seasonal help to deal with them. Joe McDermott, a recent biology graduate from Hanover College, is one of those seasonal workers whose job it is to respond to bear calls.

“A lot of people don’t secure their garbage cans,” McDermott explains. “So we have to show up with our host of tools: screamers, rubber shotgun bullets …” Usually all it takes is something loud to frighten them away.

Dobey, who had previously worked in the bear-saturated Great Smokey Mountains, is hoping for increased awareness so that there are fewer unwanted human/bear interactions. “We need increased awareness and general education about bears. So much of management is preventative, helping people take personal responsibility and prevent access to human food. Our human population has just begun to interact with bears.

“This whole hunting season is adaptive. People are saying they didn’t even see a bear. Just like those living with bears, those who choose to hunt them are learning.”

It took a while, but they learned. As the sun was setting on the 2011 season, three bears were checked in. Dobey went out to see one of them, shot by a hunter in Letcher County. It was so large that it took until 11 p.m. just to get it off the mountain.