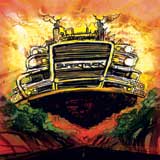 I wasn’t really lucid in the ’70s (but then, who was?), but I am a student of music history. Such a time was fertile for what we now call classic rock and Southern rock; it was the best of times and the worst of times for each. Louisville’s Supertruck has clearly done some of the same homework, and knocks out a promising collection of boots-wearing, truck-driving rock that should help establish them as a band to watch. Though cuts such as “Whiskey Cut Tea” and “She’s a Drinker” might make them sound predictable, there’s more going on here than just drinkin’ anthems. While lyrically they fall short of Skynyrd’s best story songs, and singer Jordan Humbert’s everyman vocals can’t match the beauty of Dickey Betts or the grit of Gregg Allman, Supertruck’s guitarists, Humbert and Daniel Sturdevant, kick out jams more than worthy of the Outlaws or the Marshall Tucker Band. A fluid rhythm section and extra touches of piano and fiddle help flesh out some good ol’ listening.