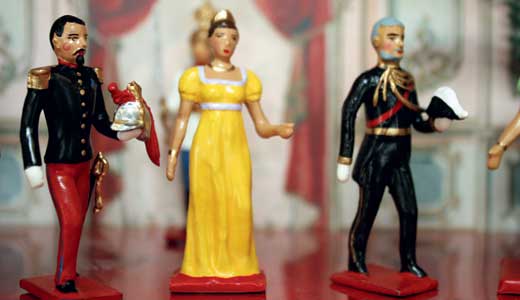 Fourth Street Live’s Hotel Nightclub has become Louisville’s home away from home for the cast members of one of the best shows on TV, “RuPaul’s Drag Race.” The Logo reality challenge returns in January for season four; in the meantime, season three’s undeniable winner, Raja, will be here to spread some Christmas cheer (and lord knows what else). Raja (born Sutan Amrull) first found reality camp fame as a makeup artist on “America’s Next Top Model,” a job he had also performed for entertainers Adam Lambert, Dita Von Teese and Pamela Anderson. Years of experience on stage and behind cameras paid off as Raja impressed “Drag” viewers with looks, style and expertise. Now Hotel welcomes the star for their “Hard Candy Holiday Ball.” Doors open at 10, but don’t expect a (professional) show until at least midnight. A meet-and-greet is promised afterward. —Peter Berkowitz

Have you found yourself lamenting the lack of quality Jacobean tragedies around town of late? Fret no more. Madness and intrigue abound in Savage Rose’s production of Thomas Middelton and William Rowley’s “The Changeling,” which the classical theater company presents in break-neck rotating repertory with William Shakespeare’s classic rom-com “A Midsummer Night’s Dream.” Though considered one of the best tragedies of the English Renaissance and the recipient of a wide body of scholarly work, “The Changeling” isn’t exactly a mainstay of contemporary theater seasons, so this is a treat both for theater nerds who want to see infrequently produced classics and for audiences out for some good old-fashioned murder, romantic intrigue and (my favorite) counterfeit fools. Each show will have five performances in the two-week run. —Erin Keane

“Water is Life” is a benefit combining art with water and faith. The water part is the Kentucky Waterways Alliance, whose efforts resulted in stricter regulations and cleaner water in Kentucky’s lakes and rivers. As host of the event, St. Andrews Episcopal Church supplies the faith. A portion of “Water is Life” proceeds will be donated to KWA and the St. Andrews community fund. Art comes from co-sponsors Sandie Griffin and Kim Torres of Lucent Dreams Photography. Along with curators Kelly and Andy Cook, they organized a group art show and silent auction (both Lucent Photography and the Cooks are donating their commission fees to the benefit, but the artists exhibiting will get their regular commission). The cover fee also includes appetizers, desserts, wine tastings and music. —Jo Anne Triplett

There are a lot of fantastic designers out there, but the Louisville Graphic Design Association has narrowed it down to the “Cream of the Crop” in their 22nd annual 100 Show, showcasing both professional and student work in this juried competition. The categories are graphic design, illustration, photography, interactive media and motion design, and this year’s judges are David Kampa of McGarrah Jessee in Austin, Justin Fines of Brand New School in New York, and Michael Cina of Cina Associates in Minneapolis. The official awards ceremony will begin at 7:30 p.m., but come early to have a drink (or a few), snack on munchies from the Bristol, and listen to some tunes while mingling with your design pals, old and new. —Jane Mattingly

So, I don’t even know where to begin with this tale. There’s ex-singer Dead, who killed himself long ago. There’s guitarist Euronymous, who supposedly cooked and ate remains of Dead’s brains. Euronymous was later stabbed, while in his underwear, 23 times by his own bassist, Count Grishnackh. This action at least kept the Count from his plan of blowing up a church. And you thought Charlie Sheen was crazy? When you wonder why metal fans take this stuff so seriously at times, remember this. The current lineup includes original bassist Necrobutcher and longtime drummer Hellhammer. What does it sound like, you ask? Pretty much what you’d guess, especially if all metal sounds alike to you. The more important question is, will they be scarier than the PHT regulars? With Keep of Kalessin, Hate, Abigail Williams and Woe. —Peter Berkowitz

The Codas began as an experiment with singer/songwriter/guitarist Kris King and drummer Jeremy Heyer, called Night Torn Mad. Those first rough recordings led King and Heyer to fill out the band with lead guitarist Matt Thomasson and bassist Aaron Williams. Once they had a full lineup and made a shift toward Southern rock, those early songs set the framework for their debut album, 1.21. On Friday, after a name change and some time off, they will re-emerge to celebrate the release of their new EP, Dead Radio. Openers include Little Heart Records labelmates Skyscraper Stereo, as well as The Instruction and Ok DeeJays. Oh, and with the $8 cover, you will receive a copy of Dead Radio. It’s the deal of the season. —Brent Owen

Many of us have multiple personas — who we are at work might be different from who we are in front of our parents or who we are on the Zanzabar dance floor. Artist Amanda Church explores her many disguises in “Monksuit,” an exhibit that will eventually be part of her illustrated memoir. “It is a beginning. It is about finding a place in this world,” Church says. “(It’s) an attempt to discover how I relate to this world, pretending that I know, at the same time fearing, that my true self will be revealed — unmasked.” The exhibit will be up at Day’s Coffee through December, and an artist’s reception is set for Friday from 6-9 p.m. —Sara Havens

With the holiday season now in full swing, your weekends are filled with home decorating, office celebrations and community events. Family time is at a premium, and an indoor event that celebrates the quintessential childhood toy is a welcome change to the hustle and bustle. A Frazier History Museum special collection, “Toy Soldiers,” is on permanent display. “There’s an element of nostalgia and childhood playfulness to toy soldiers that’s undeniable,” says executive director Madeleine Burnside. In an effort to improve on the region’s premier history museum, the exhibit will include more than 12,000 soldiers from antiquity to post-World War II. “These little figures depict real historical events and people,” Burnside adds. A “Holidays Around the World” tree exhibit is also on display at the museum. —Allison Ray

Offering affordable works by top-notch local artists, the annual $20 Art Show is a win-win for both Keep Louisville Weird consumers and said local artists. This year’s show will be held once again at Clifton Art Supply and features art by 20 artists, including John J. Cobb, Lilly Welch, Natalie Sud, Ron Jasin, Gary Bell and Suzanne Edds, to name a few. Show promoter Scott Scarboro will also be on hand and says this year’s show should appeal to everyone. “You can buy something for that special person and afford to treat yourself to something as well — silk-screened rock posters, stuffed creepy critters, folk art by nationally acclaimed artists, robots, original figurative paintings, photography and much more.” —Sara Havens

It must be Christmas time. Holiday this, holiday that. Santa Claus is making appearances in multiple places at once (how does he do that?). Department store commercials keep interrupting football games. But Yew Dell Gardens in Crestwood has something that isn’t commercialized and expensive — it’s an entire town inside a castle. OK, maybe that sounds expensive, but it’s actually the Yew Dell Gardens Express, a snow village and model train display constructed by master train builder Bob Irmscher and some of the most skilled model train enthusiasts in the region. Let’s face it, the kid inside all of us loves model trains. There will also be scavenger hunts for the actual kids, and Santa Claus himself (no, really!) will be there Saturday from 11 a.m.-2 p.m. —Kevin Gibson

CAVE began as an improvisational project in Columbia, Mo., and an experiment like that can only go one of two ways: it devolves into musical masturbation, wherein the “band” marvels at its amazing “chops,” or these pieces get chopped and refined until they become actual songs. Neverendless, CAVE’s third album, follows a similar thread as their forebears Kraftwerk and contemporaries (and fellow Chicagoans) Disappears and Brooklyn’s Endless Boogie. Driving rhythms and epic transitions are the rule, and if it takes 14 minutes to make the point, then so be it. This show also marks the debut of Old Baby, a new project with a killer lineup: Jonathan Glen Wood (Thomas A. Minor & the Picket Line), Evan Patterson (Young Widows), Todd Cook (King’s Daughters & Sons), Drew Osborn (Workers), and Neil Argabrite (Sapat). —Mat Herron

‘Bowhead Down’ by Vadis Turner

With this exhibition plus her appearance in the Louisville-produced “Why Quilts Matter” documentary, Vadis Turner has been to the city enough to qualify as an honorary Louisvillian. That’s the better for us, for Turner’s art always intrigues. “Bowhead Down” follows her usual pattern of resembling traditional “women’s work” but with a twist (Vanity Fair magazine once labeled it “lady art”). In the past, she has created a chandelier and wedding cake out of tampons. This time, we get ribbons and flowers coupled with decay. “(I’m) interested in the aesthetic bridges between diverse rites of passage,” Turner says. “Elaborate ceremonies honor, idealize and purify the subject as they graduate from one life chapter to the next. The subject simultaneously embodies a climax and demise. A new identity is conceived. An old identity dies.” —Jo Anne Triplett