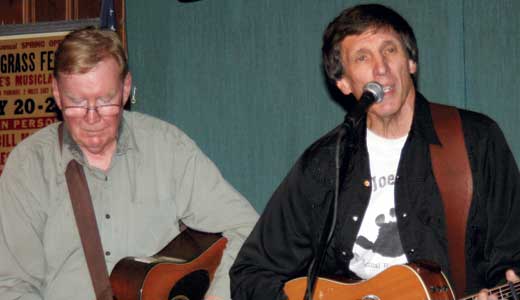 ‘The King of Christmas’

Has your Christmas season been lacking the presence of an Elvis impersonator? Have you missed the family dysfunction that makes the average American holiday so memorable? Then get out this weekend to catch “The King of Christmas” at The Bard’s Town, the venue’s last theatrical run of the 2011 season. Written by LEO Reader’s Choice 2011 favorite playwright Doug Schutte, the production highlights the beautiful eccentricities that have come to define America’s family dynamic in the new millennium. It’s a show that highlights local talent in a venue that is one of Louisville’s best-kept secrets. —Brent Owen

Before David Sedaris became an acclaimed humorist and best-selling author, he performed a variety of incredibly odd jobs: drink slinger at the state fair, something akin to a squirrel exterminator, Santa’s elf at a Macy’s department store. It’s the latter that sets the stage for “The Santaland Diaries,” an essay in which Sedaris recounts the “fist fights and vomiting and magnificent tantrums” he witnessed as Crumpet the Elf. In this version adapted for stage, Ted Lesley plays the surly, sardonic Crumpet, whose observations are both hilarious and poignant. And in case you aren’t familiar with Sedaris, here’s your warning: This show contains mature themes and is not intended for children. Don’t believe me? Be prepared to explain why lady elves must wear underwear. —Sarah Kelley

‘Stones in His Pockets’

Romanticizing Ireland is a time-honored American tradition — think of a teary-eyed farmer in a wool sweater and cap singing “Danny Boy” to his cows with a glass of whiskey in one hand and a bar of Irish Spring in the other. ShoeString Productions, under the direction of Kathi E.B. Ellis, explores this strange tendency of filmmakers to try to force an authenticity that’s anything but in “Stones in His Pockets” by Irish playwright Marie Jones. Charlie and Jake, like most of the townies in this rural County Kerry village, are working as extras on a big-budget American film, and through them we meet the production crew and imported stars as well as their fellow townies — 15 characters in all, played by Lee Look and Doug Sumey without costume or set changes — whose lives are disrupted when the circus come to town. —Erin Keane

Local country/folk singer Mickey Clark’s award-winning Winding Highways album was produced by Jim Rooney, who has also worked on albums by Nanci Griffith, John Prine, Iris DeMent, Alison Krauss, Cowboy Jack Clement, Townes Van Zandt and many more over the past 50 years. The behind-the-scenes legend has also managed Boston’s Club 47 (while earning a master’s degree in classical literature at Harvard), directed the Newport Folk Festival, managed Bearsville Studios in Woodstock, authored several books about music, and was given a Lifetime Achievement Award in 2009 from the American Music Association. Clark hosts him here as he travels from his Nashville home to visit his old friend Jean Ritchie, and Clark’s band, The Blue Norther, will act as Rooney’s backing band — the Louisville chapter of Rooney’s Irregulars — for this unique and intimate concert. —Peter Berkowitz

The weekly Friday night bluegrass series at the Shepherdsville Music Barn continues with another fine episode, this time starring the all-star group The Boxcars. Band members Adam Steffey (mandolin) and John R. Bowman (fiddle) were both early members of Alison Krauss & Union Station, and Bowman is also a veteran of Doyle Lawson & Quicksilver; Harold Nixon (bass) and Ron Stewart (banjo) are both ex-members of J.D. Crowe and the New South; and guitarist Keith Garrett was a founding member of Blue Moon Rising. The talented musicians are known to switch off on instruments and vocals, so expect variety with your virtuosity. The group comes to us while taking a break from the studio, where they are hard at work on their second album, due out next year. —Peter Berkowitz

VOICES of Kentuckiana kicks off its 2011-12 season under the baton of new artistic director Matthew Butterfield with a Christmas concert Saturday and Sunday at the Ursuline Arts Center, titled “Voices of Holidays Past.” The VOICES program ranges from the stately standard “Silent Night” to an upbeat “We Wish You a Merry Christmas,” and includes a work commissioned for VOICES called “Christmas Memories.” Also on the bill is a song titled “Christmas in About Three Minutes.” (If only it were so.) —Bill Doolittle

Atlanta, well-known home of R&B and pop-country acts, is also home to Sons of Tonatiuh, sludgey doom metal “miscreants” (their word) coming through to lay waste to the decidedly un-metal Rudyard Kipling. Aquarius Records wrote in their newsletter, “The band will flit from lumbering doom-ic creep to relentless crust metal pound without blinking an eye, and then suddenly unfurl thee catchiest rift you’ve ever heard, before pulverizing it a second later with an avalanche of crumbling, distorted crush.” In a statement, guitarist/vocalist Dan Caycedo comically commented, SoT “… will be clearing a path through the cornfields of the Midwest in hopes of destroying every Evangelical superficial mindset that has been forging this country together since the 1400s.” (Guess that’s us.) The trio has been recording their second album, due in March, with Kyle Spence of the band Harvey Milk. —Peter Berkowitz

Ohio Valley Creative Energy has become a powerhouse in this area, yet its signature facility isn’t open yet. They have plans to build the Sustainable Arts & Education Center in Indiana near Deam Lake, with studios fueled by the methane gas from the nearby Clark-Floyd landfill. Their exhibition “Powering Creativity: Air, Fuel, Heat” at the Carnegie Center gives a glimpse into their future with what is nicknamed the “fire arts” — glass, ceramic and metal objects produced by heat. The artists in the show are local standouts, including Aron Conaway, Devin French and Wayne Ferguson. The Carnegie Center is hosting “Introduction to Sustainability and the Fire Arts for Teens” (ages 16-18) on Tuesday, Dec. 27, from 2-5 p.m. The class is free but advance registration is required. —Jo Anne Triplett

‘Once Upon a Holiday’

Before we even have the chance to give November an awkward sideways goodbye hug, the Christmas season, in all its twinkling red-and-green glory, comes stomping through the door, destroying everything in its path with jolliness, jingle bells and dancing snowmen and reindeer. I’m not saying it’s not exciting — I melt when I hear “The Nutcracker” soundtrack, and my sister and I always look forward to eating Gethsemani cheese with our dad on Christmas Day. Every family has their own holiday traditions, but what about in the rest of the world, where Christmas doesn’t take over? Students from the U of L Fine Arts Department have put together an exhibit of life-size storybook pages that visitors can walk through and learn about other joyful holidays around the world, like Chinese New Year, Eid and Diwali. —Jane Mattingly

‘Unexpected Angels from All Cultures’

It’s the perfect time of year to discuss angels. But textile artist Penny Sisto likes to remind us that angels are a daily phenomenon. Her 15 works in this exhibition illustrate her ability to combine quilting techniques with storytelling, a Sisto trademark. “Angels are messengers,” she says, “in whom we can see echoes of ourselves and of the world around us. I wanted to portray angels who inhabit every culture, every situation, from the Celtic maiden … to the tiny child we see nestled in the heart of the angel of poverty. A new mother bending over her own miraculous newborn, the wide-open smile of a child with Down syndrome.” Sisto’s next gallery talk will be on Friday, Jan. 13, at 7 p.m. —Jo Anne Triplett